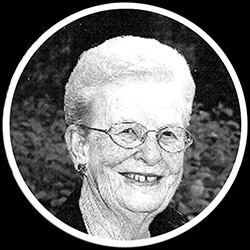 Mary L. Berda (Yates) passed away peacefully in her sleep on January 8, 2019, at Residences at Deer Creek in Schererville, Indiana.

Born on April 15, 1920, in Guston, Kentucky, to Anna Navada and David Clarence Yates, Mary was the oldest of five siblings. The family moved from Kentucky to Hammond, Indiana, prior to 1928. While Mary was attending Hammond Tech school, she met her husband Henry. They were married July 4, 1940, and moved to Lansing, where they raised 7 children. They were married for 45 years before Henry’s passing.

Mary retired from School District 215 after working 18 years as a head cook. After retiring she volunteered at St. Margaret Mercy Hospital Gift Shoppe in Dyer for many years. She enjoyed traveling, her garden, and crocheting afghans. Mary was a parish member for 67 years at St. Ann Church. She also belonged to St. Ann’s Ladies Club, Daughters of Isabella, and the Morning Church Group at St. Ann Church in Lansing.