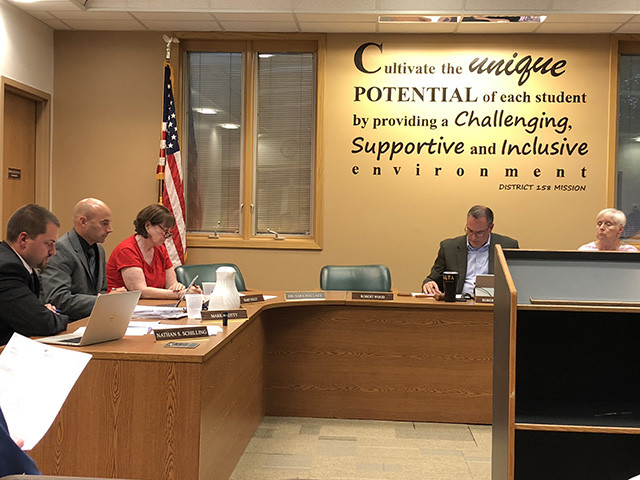 August 15 was first meeting since capping of Coolidge chimneys

LANSING, Ill. (August 19, 2018) – At the August 15 meeting of School Board 158, the Coolidge chimney swifts were not on the agenda. But Kat Podgorski, who first brought the swifts to the School Board’s attention in June, had registered to make a public comment. A transcript of her statement appears below.

I’m really just here to represent community members that are really disgruntled and upset with the district, as well as representing the chimney swifts. I’m here to represent them by expressing concern for the spirit of the compromise that was agreed to at the end of July 3rd’s Board meeting. [It] seems to have been kind of disregarded and essentially just thrown to the wayside.

There was absolutely no wavering or hesitation on the part of the board…when making sure the chimneys were capped…and the birds were given virtually no time to acclimate to the towers that went up, roughly a 36-hour window. Furthermore, the towers that are up–they actually mimic a residential-sized chimney, which would support a breeder pair of birds with maybe a couple of helper birds. If the district was truly interested in the integrity of the colony being maintained, the towers would really need to mimic the size of the only place that they’ve known as home all of these decades.

Right now, the skies are running silent. The night of August 6 was an absolutely stressful, tragic night. I know those words are kind of loaded, but for the people that were out there–it was such a huge, huge crowd–only one board member was actually there to come out to see it, which speaks volumes. Community members have really taken notice of the lack of presence of any of the people who are here tonight. The stress from the birds was really palpable in the air; I’ve never seen really anything like it. It really was distressful.

In moving forward, if 158 is interested in earning back a lot of the community support that it had at the end of the July compromise, and if it’s interested in undoing a lot of the negative PR that it’s been wrapped up in the last couple of weeks, we’re hoping that maybe the existing artificial towers could actually be turned into a larger tower, a tower that would be able to support a roosting colony, because that’s what was calling Coolidge home for all these years. There’s still time to make this right.

We understand that there’s no guarantee that the birds would take to a large artificial tower at this point. There was never a guarantee of that, but at least it would give them a chance to bring that colony back to the place that they’ve known as home. On behalf of the community members that know I am here tonight, we do genuinely hope that District 158 does the right thing, both in the long and short term for the chimney swifts that have been displaced by the vision of the district. Thank you.

Public comments are simply statements that are heard and received. No response is given or expected, and none was given at the time. But after the Board meeting adjourned, School Board President Robert Bonifazi was asked if he planned to respond to Podgorski. His reply is below:

Response by Board President Robert Bonifazi

I don’t think Miss Podgorski deserves a response, quite frankly. I think that Miss Podgorski was a little bit careless and reckless in her accusations to the Board, and so at least I am choosing not to respond. The fact that she wanted to interpret that the Board members not being there shows any lack of respect or concern–it’s careless and reckless to make that. Miss Podgorski fails to remember that this is a volunteer position, that they all have responsibilities outside of this, and because I don’t show up to something doesn’t mean that I don’t care about something.

District 171 Board meeting focused on scholastics, sports, and service