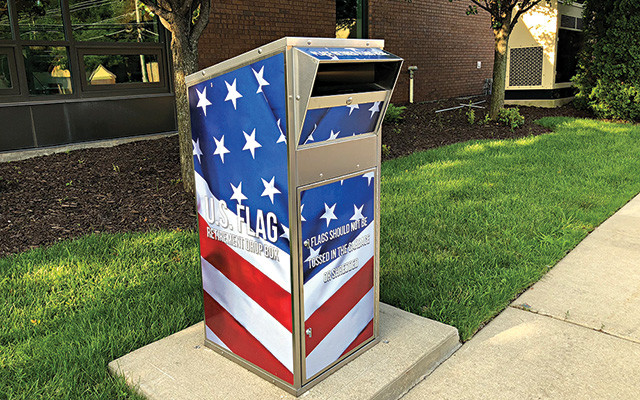 by Melanie Jongsma, with information gathered by Will Farlow

LANSING, Ill. (June 26, 2018) – Proper flag etiquette dictates that a flag that has become faded, torn, or stained should be disposed of properly. Lansing residents have access to a flag depository where they can place American flags that are ready for retirement.

The depository is located on the south side of the Lansing Municipal Center (3141 Ridge Road). It is outside the building, so flags can be deposited there 24 hours a day.

Fire Prevention Officer Keith Zigterman stops at the depository every Friday to remove any flags that have been deposited throughout the week. Holidays such as Flag Day, Veterans Day, and Independence Day often result in higher use of the depository, so on those occasions, Zigterman often checks twice a week.

Though even a torn, faded American flag deserves a respectful disposal, Zigterman says the depository often contains flags that are balled up or bagged rather than being folded properly and placed in the receptacle. Still, Zigterman appreciates the opportunity to receive flags in any condition so that the Lansing Fire Department can dispose of them properly.

“Our department’s duty crews take care of the burning of the flags at Station 29, near the Lansing airport,” said Zigterman. The department places the flags in a 55-gallon steel drum for burning, and there is no specific ceremony surrounding the disposal.

Zigterman has worked with the Lansing Fire Department in collecting and properly disposing of flags for approximately 10 years.