This month, the Brewers Association reported that more than 60% of small and independent brewing companies across Illinois have signed on to use the seal, including One Trick Pony in Lansing, Illinois. “The labels I have had designed include the independent logo,” said Owner Mark Kocol. “They are being sent to the TTB [Alcohol and Tobacco Tax and Trade Bureau] for approval next week.” 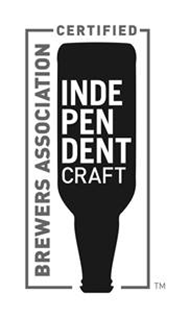 The seal features an iconic beer bottle shape flipped upside down, capturing the spirit with which craft brewers have upended beer. The logo is intended to inform beer lovers they are choosing a beer from a brewery that is independently owned.

A study commissioned by Brewbound and conducted by Nielsen found that “independent” and “independently owned” strongly resonated with the majority (81 percent) of craft beer drinkers. Increasingly, they are looking for differentiation between what’s being produced by small and independent craft brewers versus “Big Beer” and acquired brands.

“Independent craft brewers continue to turn the beer industry on its head by putting community over corporation and beer before the bottom line. They continue to better beer and our country by going beyond just making the beverage. These small businesses give back to their backyard communities and support thousands of cities and towns across the U.S.,” said Bob Pease last year. Pease is President and CEO of the Brewers Association, and he stated that the acquisition of former craft brands by Big Beer also adds to consumer confusion about which brewers remain independent. “This seal,” he added, “is a simple way to provide clarity—now they can know what’s been brewed small and certified independent.”

The seal is available for use free of charge by any of the more than 5,300 small and independent American craft brewers that have a valid TTB Brewer’s Notice, meet the BA’s craft brewer definition, and sign a license agreement. It is available to both member and non-member breweries of the BA. (One Trick Pony is a member.)

More information about the independent craft brewer seal is available at BrewersAssociation.org/seal .

About the Brewers Association

About One Trick Pony