LANSING, Ill. (December 22, 2017) – Development of Lansing’s Human Relations Commission has been slower than anticipated through the fall, but efforts are expected to pick up in the new year.

Initially, the hope was to have the Commission in place by the end of 2017. However, a series of meetings between Village administration, the Lansing Police Department, and a group of citizens and clergy called the Lansing Community Coalition took priority.

“The meetings…have been more or less follow-up on what needs to happen so that we don’t have a situation unfold like one did at the end of June,” said Village Administrator Dan Podgorski, referring to a confrontation between a black teenager and an off-duty Lansing police officer. The June 24, 2017, incident was captured on video and shared virally on social media. 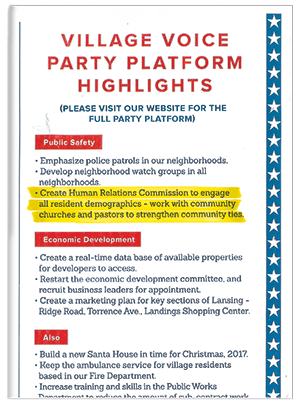 So far, the administration’s meetings have been focused on the relationship between the police department and the community, Podgorski said, but the focus will shift to the Human Relations Commission going forward.

“We needed to pay attention to these community groups, [and] give them the attention and the priority, to make sure they understood that we were dealing with the situation in the right way,” he said. “I think we’ve achieved that, but I think that’s also been one of the reasons why the formation of the HRC is delayed a little bit.”

“There’s been a ton of dialogue on this,” said Lansing’s Director of Communications, Ken Reynolds. “Different groups have different suggestions for what the Village needs to do from this point forward, and the Village administration is reviewing what our plans were for the Human Relations Commission, and then comparing that to what some outside groups are looking for.”

The main group in discussion with the Village has been the Lansing Community Coalition, which consists of local citizens and a number of clergy members—including Pastor Leroy Childress of Grace Church in Lansing.

“People want to know that there’s progress—that something concrete is going to evolve from the meetings,” Podgorski said. “One of the end results is the formation of the commission.”

The next step in putting the commission together will be a workshop-type meeting, scheduled for sometime in January. The meeting will include members of the administration, members of the coalition, and potentially one or two elected officials. The workshop is to establish the structure and goals of the commission—as well as the application process, which will be publicized for the Lansing community.

Creating the commission and choosing its members will ultimately be up to the Village Board.

“We would put together a structure and objective for the commission, and have it adopted in the form of ordinance or resolution that will establish the commission—the number of members, what their terms would be, how they are selected, and what their role would be,” Podgorski said.

Applications from potential commission members will be reviewed by the administration, and then the mayor will bring her commission appointees to the Village Board meeting, to be voted on by the trustees.

“That’s how all our other commissions work,” Podgorski said.

All this is expected to take place in the next few months. “I think it’s reasonable to say that sometime during first quarter of 2018, we will have the commission in place—or we’ll be close to having it in place,” Podgorski said.