And the meaning of the memorial

LANSING, Ill. (October 2017) – The Lansing Veterans Memorial, located at the corner of Burnham Avenue and Glenwood-Lansing Road, will be the site of an annual Veterans Day Service to honor all who have served in the nation’s armed forces. This year’s service—Sunday, November 5, at 2:00pm—will include a special remembrance of the 100th anniversary of World War I with a raising of a special WWI commemorative flag.

Attendees are encouraged to bring chairs as no seating is available. The event will happen rain or shine. In case of inclement weather, the ceremony will be moved inside the Ford Hangar. 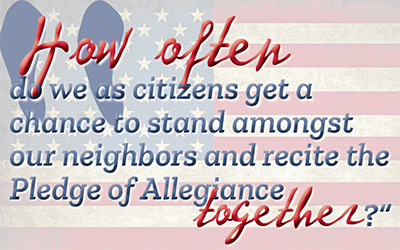 Ceremonies such as the annual Veteran’s Day service traditionally include a presentation of colors, a gun salute, singing of the national anthem, playing of “Taps,” a guest speaker, and raising of the American flag, flags of the military branches, and POW/MIA flags.

“As a veteran, I can think of no better way to honor our fallen and missing than to present our nation’s colors,” said Jeff Schoettle, U.S. Navy Veteran and member of the Lansing Veterans Memorial Ceremonial Honor Guard. “Presenting our flag, along with the POW/MIA flag and the flags of our Armed Services during ceremonies, parades, and other events helps keep the sense of patriotism alive among our citizens.”

“How often do we as citizens,” he continued, “get a chance to stand amongst our neighbors and recite the Pledge of Allegiance together? How often do we hear a rifle salute or ‘Taps’? The guard takes great pride in keeping these traditions alive while making sure those who have sacrificed for our country are not forgotten.”

In 2015, actor Gary Sinise made an appearance at the memorial, accompanying a $15,000 donation from the Gary Sinise Foundation. The donation enabled the Lansing Veterans Memorial Foundation to add a jungle trail that visitors can walk through to get a sense of what it was like in Vietnam.

The connection to Sinise goes back to the very start of the Lansing Veterans Memorial. Long before he was known for his role as Lieutenant Dan Taylor in the hit movie Forrest Gump, Sinise directed a play called “Tracers” at the Steppenwolf Theatre. The play was about the Vietnam War, and Lansing resident Tom Luberda was in the audience (and then went back to see it a second time). At the theater, Luberda grabbed a flyer for a veterans group that was just starting up, the Vietnam Veterans of America. Having served with the U.S. Marines in Vietnam in 1966 and 1967, Luberda started going to meetings of VVA Chapter 153, which originally met in Blue Island—the town where Sinise was born.

“The group just jelled and started doing good things and raising money for charities and helping veterans,” said Luberda. “Then at a meeting, I said, ‘We’re doing good stuff, but what about the guys we lost, and what’s going to happen to us after we go? Why don’t we build a memorial?”

Soon plans were underway with the help of a group of local Vietnam Veterans, most of them also members of the VVA Chapter 153. Instrumental in the beginning stages were Craig Greenhill, Tom DeBold, Ed Miszak, and Ed Kurzjera. “And if it weren’t for congressman Jack Davis and Mayor Bill Bathis, it couldn’t have happened,” said Luberda.

Though many Lansing residents are familiar with the memorial because the large helicopter is so visible from the roadways, fewer realize the symbolism enshrined on the other side. Granite walls bear the names of those lost in our nation’s conflicts, and a mural etched into the center panel represents the spirits of veterans past and the sacrifices they made. “A lot of people don’t even know it’s back there,” said Luberda.

“There’s a lot of symbolism and meaning to the memorial,” he continued. “It’s supposed to tell a story and represent the guys who didn’t come back.” Names of all fallen military members from Lansing in our nation’s wars were automatically included on the panels, and other names from across the country were added as loved ones made requests and donations.

Artist Jim McLaughlin donated his time to create the statue on the hill, which depicts the rescue of a wounded comrade.

A path leads to the POW/MIA Meditation Area where the symbolism continues—five spouts of water and five amber spotlights represent the five branches of service.

Luberda, who serves as president of the Lansing Veterans Memorial Foundation, called the creation of the memorial a true community effort. “We had the Southeast Side Vietnam Veterans, American Legion in Calumet City, Navy Seabees, Iron Workers, and Cub Scouts all working on it,” he said. “There were old ladies out there digging ditches and boy scouts laying stone. It was built with sweat and tears and nickels and dimes.”

Early on, Luberda talked with another local Vietnam Veteran, Richard Dominiak of Calumet City, about creating an honor guard to conduct ceremonies at the memorial and within Lansing and surrounding communities. An honor guard was established in 1992 and marked a quarter-century of service this past March. Dominiak joined with Larry Grzywinski of Lansing, another Vietnam vet, and the two co-founded the Lansing Veterans Memorial Ceremonial Honor Guard. It began with 11 members and today continues with about 15 active members.

“That first year the honor guard marched in the Lansing Good Neighbor Parade for the first time and conducted its first Memorial Day and Veterans Day services at the memorial—and has been doing so ever since,” said Grzywinski.

“We just celebrated 25 years as an organized honor guard,” said Dominiak. “Besides things at the memorial, we help at community events like the 9/11 ceremony. We get calls for different events, and if I can put guys together, we’ll do it, but it’s getting harder.”

Of those veterans who became part of the Lansing Veterans Memorial Ceremonial Honor Guard 25 years ago, several have passed away, have moved out of the area, or are facing health issues that don’t allow them to march in parades or stand at attention throughout long ceremonies. The honor guard hopes to attract some of the area’s younger veterans to help carry on the traditions.

The next generation of patriots

“We really need to get those from Desert Storm and Iraq and active military in our honor guard and to join the American Legions,” said LVMCHG member John Ulaszek. “We’re losing a lot of people. We’re losing the World War II and Korean and Vietnam Veterans. We need younger people to join our groups. We want them to stand up and be proud and show their colors.” 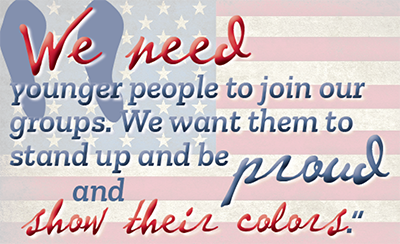 Dominiak said the honor guard is open to anyone who ever served in the U.S. Military. They need only to provide proof of their honorable discharge and purchase some uniform pieces. “We don’t charge any dues. We get contributions from community organizations when we’re asked to do something that we can’t really afford to pay out of our own pockets. At one time L.A.C.E. (Lansing Association for Community Events) paid to replace the service flags that had taken a beating over the years.”

The honor guard also likes to involve youths who may be inspired to one day join the military. Dominiak said that this year’s Veterans Day Ceremony will include Lansing’s Civil Air Patrol Squadron to carry out a 15 x 30’ flag.

A work still in progress

As much effort, thought, emotion and heart has been put into making the memorial what it is, it is far from complete, according to Luberda. “It’s not really finished yet,” he said. “It’s still a work in progress. The hill is supposed to tell a story and right now it’s an incomplete sentence. We’re missing some figures on the hill.”

Luberda’s original vision would also show a wounded soldier being lifted into the helicopter. He hopes to one day see three or four more statues added to complete the Vietnam-era scene. Lack of funding has slowed the progress. Although the labor for creating the first statue was donated, it still cost approximately $40,000 to have the piece cast in bronze.

Ongoing maintenance of the memorial is also needed, and that requires both time and money. “It needs perpetual care, and we really could use a full-time landscaper,” said Luberda, who does much of the work himself.

For information on how you can help support the Lansing Veterans Memorial, visit lansingveteransmemorial.com.

For information on being involved with the Lansing Veterans Memorial Ceremonial Honor Guard, contact Rich Dominiak at [email protected] or 708-862-7731.