LANSING, Ill. (October 24, 2017) – Dog lovers throughout Lansing have been requesting a dog park for years, and 2018 will be the year their wishes come true.

At the October 16 Park Board meeting, the Lan-Oak Park District released a preliminary artist’s rendering of a proposed dog park that has been in the planning since 2013, which is 35 years in dog years. Work will begin in the spring of 2018.

Sharon Desjardins, Senior Superintendent of Strategy and Operations, specifically requested that Lansing’s dog park not be a rectangle. “Every dog park you see is a plain ol’ rectangle with corners and straight lines,” she said. “I thought we could make ours a little more interesting.”

In choosing a location, the Park District reviewed the existing park inventory, taking specific factors into consideration. At least an acre of open grass was the basic requirement, with access to water and electricity. Parking would be needed, and Desjardins wanted to balance convenient residential access with consideration for the homes in the area. Bock Park met all those specifications.

The Park District’s former administrative office is on the site, so electrical and plumbing connections are in place, and parking is available. “All of this saves taxpayers a lot of money in the development,” said Desjardins.

While the park is closer to homes on the east side, the dog park will be located on the west side of Bock Park with the office building to the south and Chicago Avenue to the west. Eight to ten parallel parking spaces already exist along Chicago Avenue, and additional parking is nearby at the office building. The dog park will also be accessible from the current bike path. 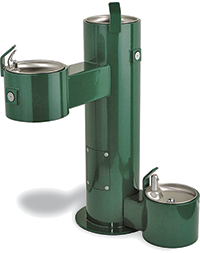 Lansing’s dog park will consist of two separate areas for large dogs and small dogs. Both areas will have play amenities such as excavated berms and dog ramps or other agility equipment. Leash posts, water fountains, and park benches are all part of the plan, although specific items have not yet been chosen. A six-foot fence will enclose the play area.

“I wanted to stay as natural as possible,” said Desjardins about the landscaping and overall design of the park. The plan incorporates the large locust tree that is already on the site, and additional plantings will be added. But Desjardins also wants to make sure that ongoing maintenance of the dog park will not become a burden for Michelle Havran, Superintendent of Parks & Maintenance, and the maintenance crews. So, for example, a border of limestone will be added around the perimeter fencing in order to make mowing easier and reduce the need for trimming.

Lan-Oak Park District was fortunate in 2013 to have the assistance of the Chicago Metropolitan Agency for Planning (CMAP) in developing a Park District master plan. As part of that process, Lansing residents were surveyed to determine what new recreation amenities were needed. A dog park scored high on the list of responses. In 2014 the Park District began researching the acquisition of a dog park for the community.

In 2015, the Village of Lansing began reviewing preliminary plans for Fox Pointe, and those early plans included a dog park. In deference to the Village, the Park District (which is a separate entity with a separate Board) put its dog park research on hold.

As the Fox Pointe plans developed, the dog park was removed as a feature, so in early 2016 the Park District resumed its research. By March of 2017, the Park District was ready to survey residents about specific dog park attributes—including the fee structure. This survey was posted on the Park District website, www.lanoakparkdistrict.org, and promoted in various Park District publications. Excitement about the project began to spread.

This past summer, Park District staff studied the results of the online survey and began the final stage of dog park planning. As of this writing, minor adjustments are still being made to the schematics—the maintenance gates will probably be moved, for example, and the exact location of the dog park within Bock Park will be affected by the results of the JULIE dig (Joint Utility Locating Information for Excavators).

But Desjardins is ready to begin putting budget numbers to the concept in preparation for opening up the bidding process. The Park District plans to be soliciting bids for the park by January 2018, with construction anticipated for spring 2018.