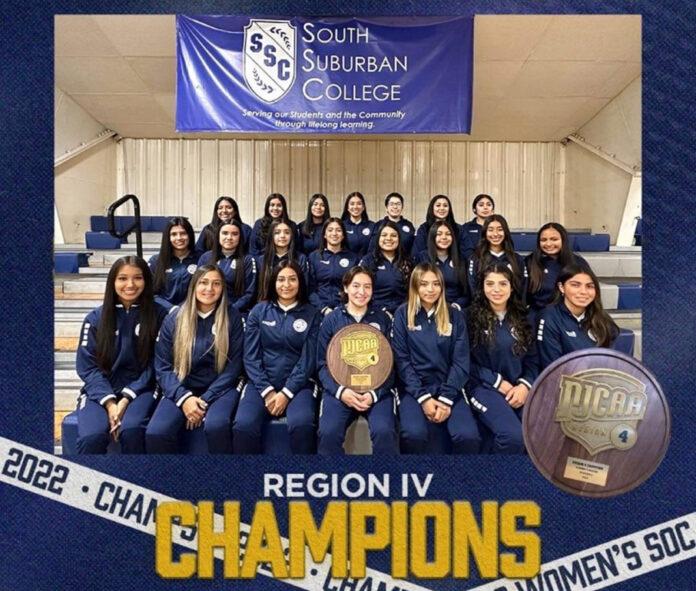 SOUTH HOLLAND, Ill. (November 11, 2022) – The South Suburban College Bulldogs will move on to the NJCAA Division II National Tournament after winning the Region Four Championship last week. The women’s soccer squad was the first in school history to win the regional championship plaque.

“In the gym at South Suburban College there are banners,” said José González, head coach of the SSC Women’s Soccer team. “That’s because teams won a regional championship. But there’s never been a banner for women’s soccer. That was our daily reminder when we walked in that we wanted a banner up there with the year 2022 on it.”

From region to nation

The Bulldogs aren’t currently focused on hanging their banner, however, as the team is looking to the National Championship Tournament in Tucson, Arizona, which starts on November 14.

South Suburban will battle other NJCAA Division II teams from across the country to try to earn the title of national champion.

Coach González has coached the women’s team for seven years, and has experience coaching the men’s team before that. When asked about this year’s success, however, he pointed to his players.

“Our success is due to the talent the girls come in with,” he said. “And also our players’ commitment to getting back to the national tournament and setting the goal of winning a regional championship as a priority.”

González’s daughter, Amaris González, is not only a team leader, but a national stat leader as well. Across all of NJCAA Division II, Amaris González leads the country in goals (36), is second in shots (100), and is third in assists (20). The SSC sophomore is a graduate of TF South High School in Lansing.

The full team roster is available at ssc.edu/athletics.