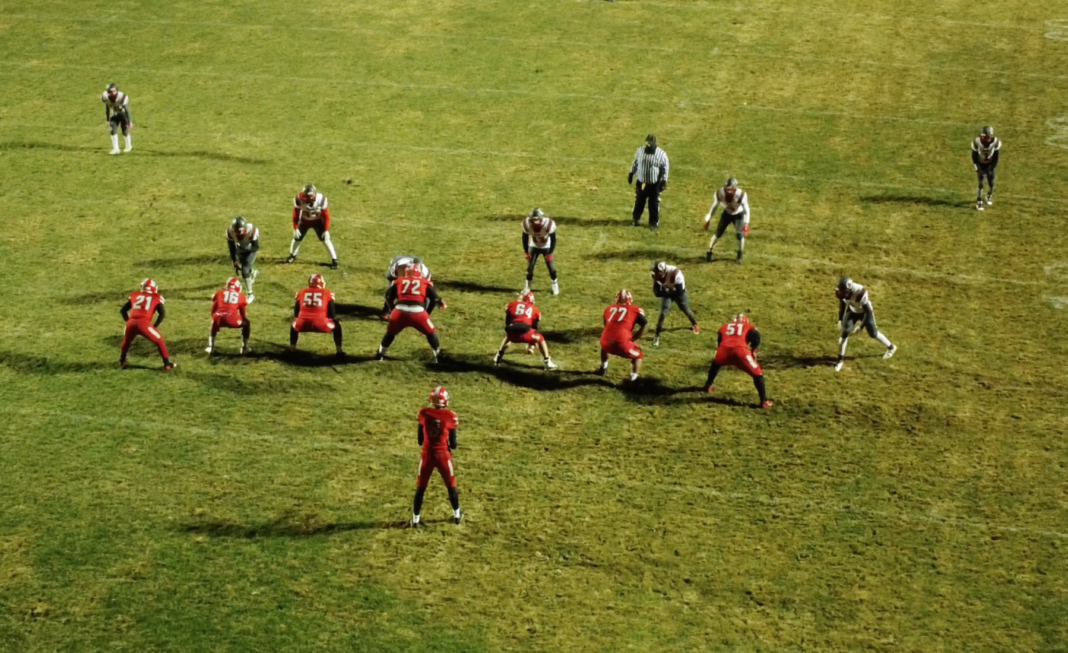 LANSING, Ill. (March 19, 2021) – The TF South football team took the field Friday night to play its first game of the school year, and likely its first ever game in March. The game was played at TF South’s Padjen Field, the first game of a shortened season that was moved from the fall to the spring due to COVID-19 concerns.

TFS outlasted the Bremen Braves in overtime for a 20-14 final score on a clear but cold Friday night that threatened to dip into freezing temperatures.

The first half of the game was scoreless as both teams shook off the rust of a longer-than-usual hiatus from the Friday Night Lights. Coach Bob Padjen told his team at halftime they had to “take control” of the second half.

With 6:31 remaining in the third quarter, TF South drew first blood as senior quarterback Isiah Lewis snuck a 16-yard pass to senior Joe Turner in the front corner of the end zone. A blocked PAT attempt set the score at 6-0.

With eight minutes left in the fourth quarter, the Braves struck back and ran the football three yards into the end zone for a touchdown. After a missed PAT, the score was tied at 6.

With only a 1:30 left in the game, Lewis and Turner connected again for the longest pass of the game, a 41-yard heave to bring TFS within striking distance of the end zone. A tipped pass leading to an interception cut the drive short, however, and the game went to overtime.

A video of the long pass from Lewis to Turner is below:

In overtime, IHSA rules dictate that each team is given one set of downs and the football at the opposing team’s ten yard line. If the first team scores, the second team must also score to keep the score even, or the first team wins. This process repeats until one of the teams does not score. Friday was the first time TF South has gone to overtime since a 2018 game versus TF North, Coach Padjen said.

TF South had first possession of the ball and a touchdown run by Lewis was followed by a two-point conversion by senior Wilson Buckley Jr. TFS led 14-6.

Bremen was then given a chance to even the score and took it, scoring a touchdown on a pass to the back of the end zone, the school’s only pass completion of the evening. A successful two-point conversion resulted in another tie at 14-14.

Bremen drew first possession in double overtime, and on their first play of the drive, TF South junior Toules Polk recovered a fumble, ending Bremen’s chance to score. Needing any type of score to win, the veteran Lewis once again led the charge into the end zone with a short run, securing TF South’s 20-14 victory.

TFS players swarm around Lewis after his game-winning touchdown run:

Padjen said he was impressed with the way Polk stepped up during the fumble play in double overtime: “He’s a kid that I asked at the end of the game and I said, ‘You didn’t even expect to play, did you?’ He goes, ‘No coach, I didn’t,’ and he ended up having the winning fumble recovery in overtime.”

The two teams were roughly even in rushing yards, with Bremen running the ball for 119 yards and TF South running for 112. TFS dwarfed the Bremen’s passing numbers however, throwing for 107 yards to the Braves’ 10. 61 of those passing yards were caught by Turner.

“Our seniors definitely helped us in this game,” Padjen said, “they really stepped up and it’s exciting to win.” He also mentioned the team was very “rusty” and has plenty of corrections to make moving forward.

A source of the rust, he said, comes from the scheduling changes and limitations of COVID. He said the team met for only six days over the summer before COVID regulations prevented them from doing so. The coaches didn’t see the students again until March 3, when the the team began football practice, just over two weeks before its first game.

Padjen spoke highly of the performance of the seniors during the game: “The rest of the guys are basically inexperienced kids and with a few injuries, … the seniors came up and made the plays.”

TF South is scheduled to travel to Tinley Park High School next week, where they will take on the Titans at 7 p.m.

“The kids got some experience, we’re going to watch some tape, try to get better, and try to go 2-0,” Padjen said, “One game at a time. This is just a different type of season. Like we told the kids, it’s basically one-third over already. There’s three weeks of practice, and you only have five weeks left. It’s nuts.”