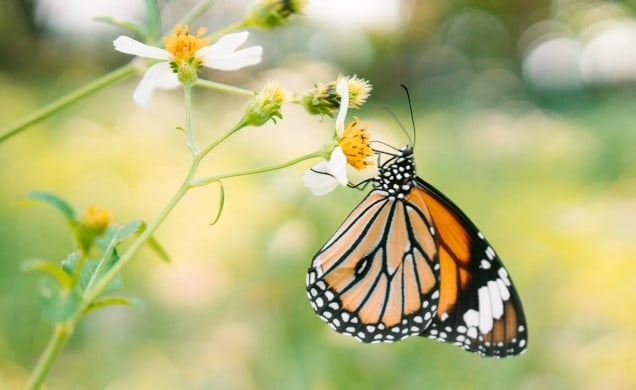 Tasked with bolstering the population of monarchs and other pollinators by protecting habitat and adding food sources, the project brings together public agencies, private organizations, and residents of the state in a collaborative and coordinated effort to ensure the survival and successful migration of monarchs.

“Though small, pollinators play an extremely important role in our survival here in Illinois and the world,” said IDNR Director Colleen Callahan. “This signing not only moves us as a state from plan to action, but also reaffirms our commitment as public servants to doing our part in ensuring pollinators’ survival.”

As part of a regional effort to add 1.3 billion stems of new milkweed to the central U.S. to support migrating monarchs, Illinois is tasked with adding 150,000,000 stems of new milkweed embedded in diverse nectar sources by 2038. As one of the largest landowners in the state, IDOT is in a unique position to contribute resources to this goal.

“We hold a special commitment at IDOT for the environment and the role pollinators play in the Illinois ecosystem and economy,” said Acting Illinois Transportation Secretary Omer Osman. “From mowing schedules and restricting the use of pesticides to planting only certain species along our roadsides, IDOT has embraced many changes in policies and practices over the years to protect pollinators. This plan only serves to strengthen those efforts going forward.”

Prior to the project’s beginning in October 2016, efforts to protect pollinators already were in place at state agencies and organizations. Those plans, as well as new initiatives, have been included in the state’s action plan to maximize efforts.

“Illinois leads the nation in soybean production and is number two in corn, so our state’s farmers are well aware of the importance of pollinators,” said IDOA Acting Director Jerry Costello II. “Understanding their importance to all Illinois crops, IDOA has executed a multi-year pollinator habitat establishment at our fairgrounds in Springfield and DuQuoin. This multi-year plan, which is in its second year, will convert approximately 25-30 acres of land when fully completed.”

Additional information on the Illinois Monarch Project, as well as full text of the plan, can be found at IllinoisMonarchProject.org.