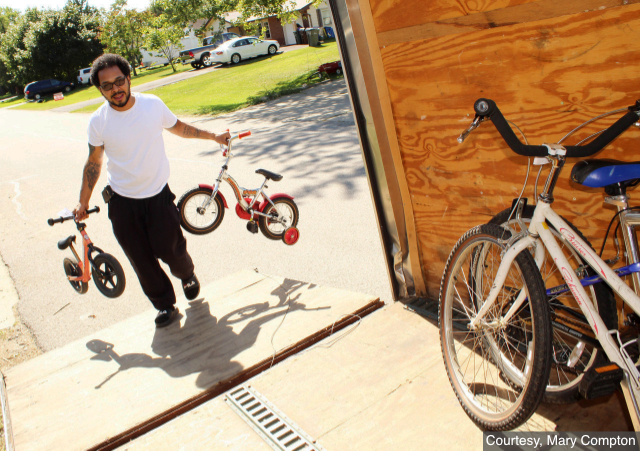 Those who scroll through various Lansing social media sites may recall a local resident identified as “Ju Sherman” recently posting that he had free refurbished bikes to give away to those in need. The bicycles were quickly claimed in just five weekends, and recipients commented their online thanks for Ju’s bicycle benevolence. But few know the humbling and transformative backstory of Lansing resident Julian Sherman, who grew up in the projects of Altgeld Gardens.

“Back then … I was less fortunate … me and my friends, we were less fortunate. We really didn’t have bikes, and I hate to admit it, but we did go out and steal bikes,” Sherman said. “And that actually led us into a life that we shouldn’t have been a part of—we shouldn’t have taken part of—but as I got older, started working, and still doing other things that I shouldn’t have been doing, I ended up going to jail. And this one particular time I went to jail, a chaplain handed me a flyer for a welding program.”

The life-changing flyer Sherman received that day was for Chicagoland Prison Outreach (CPO), a Christian ministry based in South Holland. CPO reaches out to both incarcerated and previously incarcerated men, women, and their families and provides services that include in-prison discipleship and educational programs. It also provides post-prison mentoring, accountability, life skills, and vocational training and has several outreach programs through partnerships with local churches. CPO ministers at Cook County Jail, Westville Correctional Facility, and River Valley Juvenile Detention Center. Their Fellowship and Career Center, which houses the welding workshop, is located at 407 W. 104 St. in Roseland, not far from Altgeld Gardens where Sherman grew up.

“At that time [of receiving the CPO flyer], my bond was $10,000. I didn’t have it, but when I reached out to my family, I told them, ‘Hey, there’s a welding program right on the south side of Chicago.’ At that point I didn’t know what welding was, and I’ll tell you how God works—God made a way for me to learn what welding is, my family came up with the bond money, I was out, and I called the number for the program and the following week, I was in,” Sherman said.

When he entered the welding program in 2015, it was a four-month program. Today it is a three-month program and is free to trainees, funded entirely by private donors. Every year CPO hosts a large fund-raising banquet, with the exception of this year, during which they are relying on online funding.

“So I took the course in 2015, and ever since then, … I’ve been doing really well with welding job after welding job, and leaving one job for a more higher-paying one. I was contacted—the director reached out to me—and he wanted me to come back and help teach. So since 2017, I’ve been the welding instructor with Chicagoland Prison Outreach,” Sherman said.

Sherman is a welding instructor in both the classroom and the workshop, working 30-40 hour weeks, teaching as many as twelve former prisoners at a time. Currently he has five trainees, though he began with eight. “People say that they want it, they’re ready for it, but they’re not making the sacrifices to change their life because we’re a drug-free, alcohol-free, Christian organization. Either it’s their attendance or their attitudes,” he said.

“We try to incorporate the Bible—we try to give them positive direction. We have Bible studies for them and we try to give them a different outlook on life. It’s not about the quick money and just the streets. We want to teach [them] about God, and everything else—you know, like work hard for your money. And the director feels as though I’m the perfect example for the guys that are taking the course because I’ve been there where they are,” Sherman explained.

“I took the class, and now I’m well off. I’m doing welding side jobs that are $8,000 or better. I’ve experienced everything that I could with welding, and I could take it a whole lot farther, but I really enjoy doing this, where I’m giving back to the neighborhood—you know—trying to get these guys off the street, give them a different mind frame,” he said.

Through his work at CPO, Julian Sherman met Al Schroader, a Mokena resident who is locally known as “The Bike Man.” Schroader refurbishes donated bicycles at his home and then distributes them to various charitable organizations, including CPO. Because Sherman owns a large vehicle and trailer, Schroader often asks him to assist in transporting the bikes that are to be distributed to CPO. However, this year CPO could not accept any additional bikes because they already are housing about three hundred bikes that could not be distributed during the usual summer bike giveaways due to the pandemic. Schroader called Sherman, asking him to help him find a place for the additional bikes.

“Now when [Al] called me, I had just noticed on the Facebook page that someone posted about kids staying in Lansing that are stealing bikes. So, I figured, you know, ok, this is right on time. Al has bikes. I could give them away to the kids in the neighborhood. Then we won’t have to worry about bikes coming up missing,” Sherman said.

In addition to providing free bicycles to Lansing residents, Sherman returned to Altgeld Gardens this past weekend—the very neighborhood where he once rode bikes he had stolen—and he informally announced to kids on the street that he would be handing out free bikes at a local storefront. By the time he finished making the rounds and showed up at the storefront, a crowd of kids and their parents were waiting. He told them, “Take your pick!” and in five minutes they were all gone. “As I was pulling out of the parking lot, there were kids to my right, kids in front of me, kids to my left, everywhere riding on the bikes.”

For more information about Chicagoland Prison Outreach, visit their website at cpoministries.org.