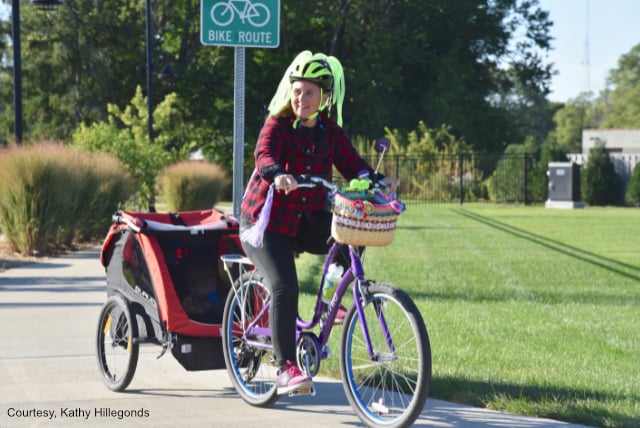 LANSING, Ill. (September 22, 2020) – If you would have asked Amy Todd in January how she was planning to make the 2020 LOOP (Lansing Out On Pedals) event safe for participants, she probably would have thought you were talking about bike helmets and road closures. Like nearly all events that have occurred (or not occurred) since mid-March, this year’s LOOP was affected by COVID precautions—but was largely successful nonetheless.

This year marked LOOP’s 8th annual bike ride around Lansing. This year’s ride started at 5 p.m. on Saturday, Sept. 19, when cyclists rode 12 miles around Lansing. After a break, the final three miles took riders to the Lansing Municipal Airport after dusk where they could travel the lit runways.

Todd is the Director of the Lansing Area Chamber of Commerce, which organizes LOOP every year. This year, she and other event organizers were forced to change some parts of the event. Cyclists were divided into three groups and start times were staggered to avoid having the whole crowd depart at the same time. In place of a traditional barbecue that would occur at the end of the ride, cyclists were given goodie bags instead.

Todd was impressed with this year’s turnout, given the unique circumstances. “The interesting thing to us is we had probably more than a third of the people were from surrounding towns and had never ridden [LOOP] before,” Todd said. “It was really cool for them to come in and get to see Fox Pointe.”

She said that the reason for so many newcomers might stem from the Facebook ads regarding the event as well as the fact that many other rides have been cancelled in recent months. “People were just really looking to get out and do something fun,” Todd said. “We got a lot of compliments this year—people were just having a great time. Our volunteers were very enthusiastic and people really enjoyed that.”

Another change to this year’s event was a bike decorating contest. Deb Olsen-Kronenbitter won the contest and took home a Lansingopoly board game and a certificate for a large pizza from Mancino’s.

More photos from the event are included below:

Below is a timelapse video taken toward the end of the ride at the Lansing Airport:

Add The Lansing Journal to your mobile home screen