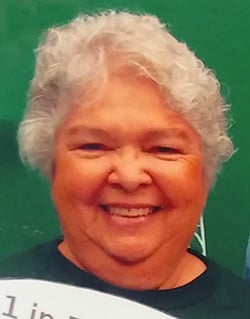 CALUMET CITY, Ill. (May 19, 2020) – Virginia Delle Molle, a fifty-year resident of Lansing, passed away April 14, 2020, a victim of COVID-19. She leaves behind her daughter Dawn and son-in-law Rick Cozad. She was preceded in death by her husband, George.

Virginia was retired after 40 years of service the from business office of Monarch Laundry, later Angelica Laundry, in Chicago. Her later years of employment were as the office manager. It was at Monarch that she met and later married George.

After her retirement from Angelica, Virginia did part-time work with H & R Block.

She helped manage the food supply, doing the ordering from and coordinating with the pantry’s main source of food, the Greater Chicago Food Depository. Her managerial skills were evident, but what was perhaps even more evident was her great warmth, friendliness, compassion, humor, and humanity. And that big, beautiful, and ever-present smile. She had an aura. Virginia made you feel that life and people are intrinsically good.

For all the lives you touched with your life—including the thousands who never got to meet you as you labored in the back of CCR to fill their bags with food—thank you, and rest with God.