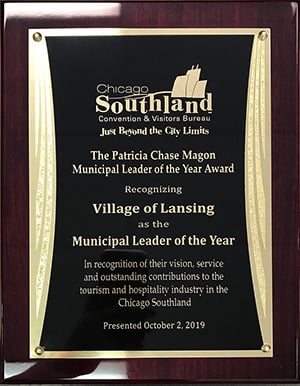 Named after former CSCVB chair and South Holland Trustee Patricia Chase Magon, the Municipal Leadership Award is presented to a leader or municipality that understands the value of tourism to the local and regional economy, as well as the impact of tourism on the people of the Chicago Southland.

Lansing was chosen this year in large part because of the recent development of Fox Pointe and the successful concert series held there this summer. The concerts and other events brought people to Lansing from South Holland, Calumet City, Lynwood, Crete, and other surrounding Illinois communities, as well as Highland, Munster, Dyer, and Valparaiso, Indiana.

Municipal Leadership is also demonstrated by working with a variety of stakeholders to maintain old traditions while innovating new ones. Lansing evidences this in such events as the Good Neighbor Day Parade and the LOOP Bike Ride, which are organized by the Lansing Area Chamber of Commerce; Cruise Nights, which are organized by the Lansing Association for Community Events; and Hangin’ at the Hangar, a Village-organized event held at the historic Ford Hangar.

“We’re extremely proud that the Village of Lansing received the CSCVB 2019 Patricia Chase Magon Municipal Leader of the Year Award, and so well deserved,” said Jim Garrett, CDME, President/CEO of the Chicago Southland Convention & Visitors Bureau. “This was presented to Lansing primarily for their vision, planning, and development of Fox Pointe. This project offers to residents and visitors alike an embracing new premiere music and entertainment destination venue and reflects the true quality of life image and personality that Lansing has become. The Village of Lansing and their residents certainly show their community pride in Fox Pointe, and congratulations to Mayor Patricia Eidam, the Village Trustees, and staff for their vision for making Fox Pointe a new center point of pride for the entire community.”

Another Star in Lansing

Lansing was also represented among the Stars of the Industry Award winners, an award that recognizes outstanding hospitality employees in Food & Beverage, Guest Services, Housekeeping, Maintenance, and Management. Jedika Diaz, who works at the Sleep Inn Hotel in Lansing, received the 2019 Guest Services Employee of the Year Award. Stars of the Industry are nominated from throughout the Chicago Southland by their place of employment, and winners are chosen by an independent, statewide panel of tourism and hospitality professionals.

Since 1994, CSCVB has been celebrating extraordinary individuals in the hospitality and tourism industries. The Chicago Southland Convention & Visitors Bureau, located at 2304 173rd Street in Lansing, is the official destination management and marketing organization for Chicago’s 63 south and southwest suburbs. CSCVB markets the region as a destination for meetings and conventions, group tours, sports events, and leisure.