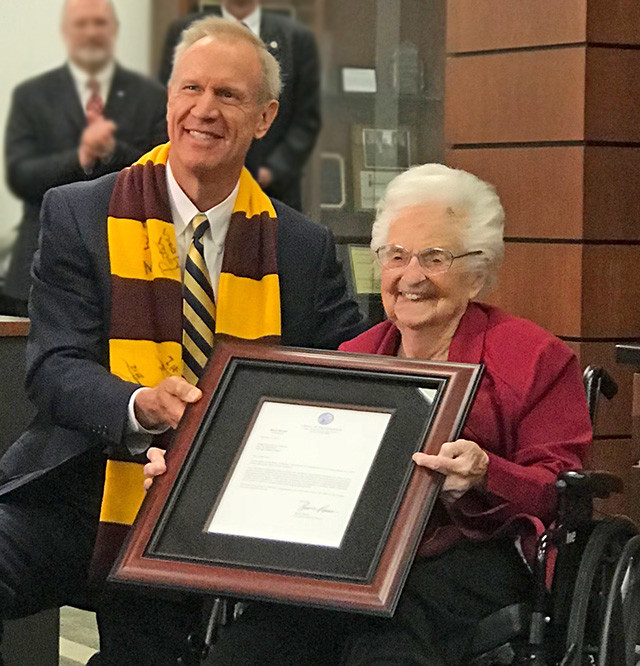 information provided by the Illinois Department on Aging

“Sister Jean has been a force in the educational community for more than 70 years, and we’re proud to honor her with this Senior Hall of Fame award,” Rauner said. “The world knows her as the chaplain for the Loyola Men’s Basketball team, but here in Chicago—and on the Loyola campus—we know her as a teacher, counselor, advisor, coach, and civil rights activist. She sets a world-class example for all of us to follow.”

Sister Jean is a fixture in Chicago and on the Loyola campus, continuously working to expand educational programs and opportunities, as well as positively impacting the community. She became a devoted member of the Sisters of Charity of the Blessed Virgin Mary in 1937 and spent the next 24 years working in elementary education as a teacher, coach, and principal.

In 1961, she moved to work at Mundelein College, serving as assistant professor, associate dean, acting dean, associate vice president for academic affairs, and director of the Academic Advising Center. Throughout the 1960s, Sister Jean took an active role in civil rights and social justice movements. She also directed Mundelein’s Reading Program, where she placed students in neighborhood schools to receive teaching and tutoring experience as professionals. When Mundelein merged with Loyola University in 1992, Sister Jean moved to the role of academic advisor for the School of Continuing and Professional Studies.

Among the numerous programs she helped establish at Loyola, the SMILE program—Students Moving Into the Lives of the Elderly—grew as both seniors and young people benefitted from the unique experience and multi-generational exposure.

Since 1994, Sister Jean has served as the Loyola basketball’s team chaplain. Until she broke her hip last November, she had missed only two games during those 24 years. Her words are boldly painted on the team’s weight room wall: “Worship. Work. Win.” She was on the sidelines of every 2018 NCAA tournament game, as the Loyola Ramblers made their way to the Final Four.

“Sister Jean’s impact extends well beyond the basketball court, however,” said Jean Bohnhoff, Director of IDoA. “Her dedication to the unique needs for advice and counseling of all Loyola students is legendary. For the positive impact she’s made on the lives of generations of students, and with optimism and humility, I might add, we recognize Sister Jean Dolores-Schmidt with induction to the Senior Illinoisans Hall of Fame.”

About the Senior Illinoisans Hall of Fame

The Senior Illinoisans Hall of Fame was created by the Illinois General Assembly in 1994 to honor Illinois residents ages 65 and older for their personal achievements in four separate categories. Since then, 117 people have been inducted into the Hall of Fame including the 2018 inductees. Schmidt is one of four inductees for 2018. She represents the Education category. The other three categories are Community Service, Work Force, and Graphics and Performing Arts.