Vague proposed policy leaves much up to the discretion of Mayor

LANSING, Ill. (February 7, 2018) – When Wyatt Dinan (spelling not verified) stood up during the Public Comment section of Tuesday’s Village Board meeting to express concern about the high fees associated with late payments for vehicle stickers, he was too late. The Board had already voted.

Hearing from the public

This is the kind of situation that Trustees Maureen Grady-Perovich and Jerry Zeldenrust had in mind when they suggested that Public Comment take place at the beginning of Board Meetings and at the end of Committee of the Whole meetings. Since Committee of the Whole meetings are a time for ideas to be presented and discussed, it’s logical for the public to hear that discussion and then have an opportunity to add their own comments and questions during Public Comment at the end of the meeting. The items that are discussed during Committee of the Whole are then voted on at the following Board meeting, usually two weeks later. Allowing Public Comment at the beginning of that meeting, before any items are voted on, would give the public one more opportunity to express opinions to their elected officials. 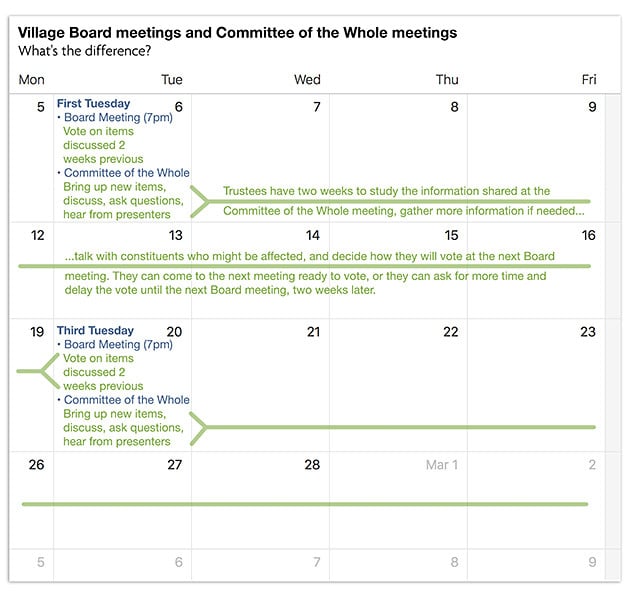 1. Members of the public shall have an opportunity to make comments to the Village Board at all public meetings during a specific time designated on the agenda. While the comments should be related to matters pertaining to the Village, the manner in which individuals may be recognized to make comments may include raising their hand, placing their name on a sign-in sheet, or submitting a request to the Village Clerk prior to the start of the meeting. The manner of this recognition is at the discretion of the Mayor or presiding officer and may be dependent on how many individuals are present at a given meeting.

4. The Village Board shall strive to hear all citizens desirous of making a comment at all meetings. If it’s necessary, due to a heavy agenda, late hour, or the length/amount of time being consumed by the Mayor or presiding officer may request the public to adhere to a 3-5-minute time limit, in addition may consider limiting the overall amount of time dedicated to public comment at that meeting.

5. Members of the public as an alternative to speaking may submit written materials to the Village Board regarding any matter pertaining to the Village.

6. Comments by members of the public made at a Village Board meeting during the specified time designated on the agenda shall not be taped, televised, or broadcast in any form of media by the Village to ensure that every member of the public is afforded the opportunity to freely express their comments.

8. Failure to adhere to the provisions of this policy shall not affect any ordinance, resolution, motion, or other action of the Village Board.

Trustee Grady-Perovich asked five questions about the proposed policy, and she was the only Trustee with any input on the subject. (Trustee Zeldenrust was absent from the meeting with notice.) All of her questions were requests for more specific language or more obvious commitments from the Board to either make it easier for constituents to express themselves or to provide answers to questions that are asked.

Because none of the eight items in the proposed policy specifies where Public Comment shall be included in a meeting, Trustee Grady-Perovich asked about that. “I left that specifically vague,” answered Administrator Podgorski. “That gives the Board some flexibility to move it. If the opinions of those that are up here on the dais change, then its placement could change as well.”

“I struggle with that,” explained Grady-Perovich, “only because sometimes people come to the meeting after they heard what went on at the Committee of the Whole, before we make a vote, and they have something they want to let us know about, and we don’t give them the opportunity to speak until after we’ve voted.”

“Mr. Podgorski explained himself very well,” replied Mayor Eidam. “He was very careful to talk about this at two previous meetings, took a poll of the elected officials more than once, and the numbers speak for themselves. I think that we should leave it exactly the way it is.”

The proposed Public Comment policy will be voted on at the next Village Board meeting, on February 20. Because there will not be an opportunity for the public to speak at that meeting before the vote takes place, members of the public who have an opinion about how and when they should be allowed to address their elected officials should express their opinions before February 20. Clickable contact information for the Village elected officials is provided below, along with direct phone numbers:

Village Administrator Dan Podgorski is not a voting member of the Board, but as the crafter of the Public Comment policy, he may be able to answer questions residents have about its content:

Board meetings are held at 7:00pm on the first and third Tuesdays of every month at the Municipal Court Complex, 2710 170th Street. The next meeting is scheduled for Tuesday, February 20. Meetings are open to the public.