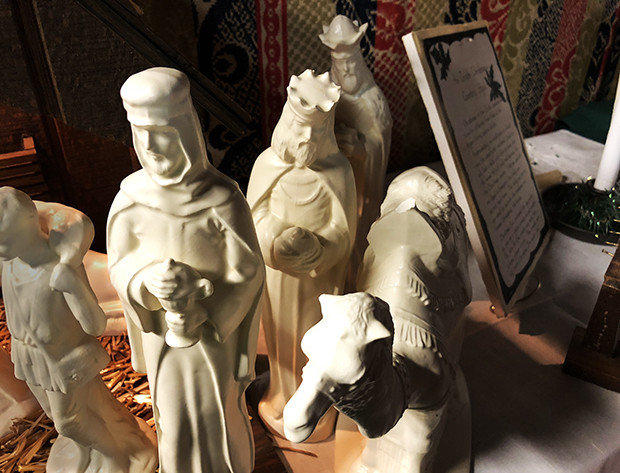 Barb Dust closes Festival of Lights with a new tradition

story and photos by Melanie Jongsma

LANSING, Ill. (January 6, 2018) – When Curator Barb Dust realized that the ending of the Festival of Lights would coincide with Epiphany this year, she began looking for a Three Kings cake. The cake—also known as King Cake, Twelfth Night Cake, Epiphany Bread, or Rosca de Reyes—is part of of the traditions surrounding the observance of Epiphany in many cultures. Dust turned to Lansing’s La Rosa Bakery for the cake and had it ready when the Festival of Lights opened at 11:00 this morning for its last day.


The cake is like a coffee cake in texture, and it is formed into a ring to give the appearance of a king’s crown. Baked inside the cake is a small Baby Jesus doll, a reference to the King sought by the Three Kings (or wise men, or magi). The person who discovers the Baby Jesus in his piece of cake is honored as “king for a day,” ending at midnight on January 6. In some traditions, the winner is also responsible for hosting the next month’s party.

Epiphany around the world

In many countries and cultures the Christmas season extends to January 6, and Epiphany is the culmination of the gift-giving holiday. The Lansing Historical Society began adding Epiphany exhibits to their Festival of Lights displays about three years ago. This year’s display included explanations of Epiphany traditions from the following countries:

Poland, Bavaria, and other Catholic countries

Heritage Middle School student Peter Henderson was the first guest at the Epiphany celebration, though he declined the cake. He had spent the morning at the library reading and decided to take a break. “I wanted to explore,” he explained. “I’m like, ‘I haven’t been down here [in the museum] in a long time. Let me come down here and see what is going on.'” Unaware that today was Epiphany, or that it was the last day of the Festival of Lights, Henderson was delighted at his discovery. Dust was delighted at his delight, and she gave him a personal tour of many of the exhibits.

Packing it all up

The Historical Society’s observance of Epiphany ended at 1:00pm today, and volunteers will spend the next few weeks packing up the Christmas displays. Dust says it takes all of January to disassemble the trees, put away all the ornaments, and fit the bins and boxes back into the storage room. She credits “Tony’s genius,” referring to fellow Historical Society member Tony Delaurentis, with the ability to fit a growing number of exhibits into the same amount of storage space each year.