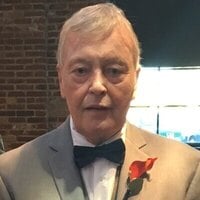 Michael (“Mike”) grew on the south side of Chicago and graduated from Leo High School. He and Patricia were neighbors and would eventually marry and raise nine children. Mike was an excellent baseball player and was invited to tryout camps for two major league teams. After a year at college he decided to return and work for his father in the trucking industry. At the age of 27 he started his own trucking company, United Transportation Services (Chicago Heights, IL), and he and his drivers specialized in hauling steel in and out of the large steel mills in Chicago and NW Indiana. He remained in business for over 40 years.

In his free time Mike spent a great deal of time playing 16” softball at a high level, playing on national championship teams from the south Chicago area. He was inducted into the 16” Softball Hall of Fame as a member of the Whips. Mike enjoyed ice hockey and was heavily involved with the teams his children played for. Through competitive hockey he was able to travel with his boys across the US, Canada, Sweden, and Switzerland. Hockey is also what drew Mike and Patricia to attend the 1980 Olympics with a group of friends in Lake Placid, NY where they able to witness the “Miracle on Ice.” He enjoyed watching the Chicago Blackhawks and Chicago White Sox. He tried to make every baseball, hockey, or softball game possible for his grandkids after retirement and he played competitive softball up until his early 70s.

Mike also enjoyed fast cars and fast boats and loved being on the water. He owned several older classic vehicles during the 1970s and 1980s. He enjoyed spending time with his kids and grandkids, always up for a BBQ and a cold beer. Mike was also a very charitable person, often financially helping out family and friends. He heavily supported a number of not-for-profits including St. Jude Hospital, Native American Indian charities, American Cancer Society, and the Glenwood School for Boys.

Mike was a very strong-willed person and never shied away from offering his “advice.” He battled a number of ailments over the last several years but he never gave up, always fighting to get home, earning the nickname Iron Mike. He left a strong legacy of children, grandchildren and great-grandchildren and he will be sorely missed by all.