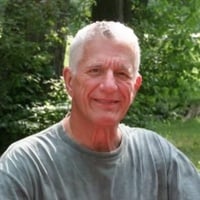 John graduated from Thornton Fractional North High School where he captained the varsity basketball team. He then enlisted in the U.S. Army where he received a medal as a Sharp Shooter and was honorably discharged in 1956. He worked full-time at Youngstown Sheet and Tube Company during the day and attended Indiana University Northwest, Purdue Calumet, St. Joseph’s Calumet, and DePaul University at night. He graduated from DePaul University with a B.S. degree in Management in 1962. After graduation, John spent his entire career at Youngstown Sheet and Tube Company. He headed the Industrial Engineering Department and finished his career as the Production Planner.

John’s amazing feat was building his family homestead with the loving help from his father while he worked full-time. John enjoyed spending time with his family, especially attending his kids’ and grandkids’ activities.

In lieu of flowers, please donate to Share Foundation or plant a tree here.