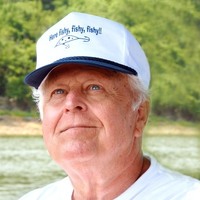 On Monday, January 16, 2023, Ivan Henry DeGraff passed away, just two weeks before turning 92. He was surrounded by his loving wife, Reta; his children, Shari DeGraff Stewart and Jeff DeGraff; his son-in-law, Bob Stewart; and two of his grandchildren, Connor and Noah Stewart, as he took his final, peaceful breath.

Ike was born on February 4, 1931, to Isaac and Minnie (Anker) DeGraff in South Holland, Illinois. He served in the Navy during the Korean War and later returned to his hometown where he married Audrey Gross in January 1957. Together they had two children, Jeff and Shari. Audrey died in 1971 at the age of 33 from cancer.

He later met and married LaReta Burzynski from Valier, Illinois in 1972. On February 12 they would have celebrated their 51st wedding anniversary. Together they created and ran Grammer Tours, a successful tour business with Ike as the bus driver and Reta as tour guide. The joyful combination of their wit and warmth endeared them to the many who joined them over the years.

Previous to his tour bus days, Ike had been in the poultry business, owned car washes, and could unfailingly be found each morning at the South Holland coffee shop, “shootin’ the breeze” with the guys. He was passionate about boating, fishing, golfing, and horses. He loved sunshine, and in 2005, they bought a small horse farm in Fisherville, Kentucky, with his son, Jeff, and moved there to enjoy warmer weather and closer proximity to grandchildren. There, he and Reta were active members of Highview Baptist Church and found a dear community of friends. His faith was enormously important to him; and in his final years, he found great solace in knowing that he would be welcomed home by his Lord.

Ike will be forever remembered for his incredible wit, constant quips, and twinkling blue eyes; charming everyone up to the nurses tending him in his final days. He is survived by his devoted wife, Reta, whose committed care for him over the years was a true sign of their shared love; also by his children, Jeff and Shari; six grandchildren and four great-grandchildren; and many beloved cousins, in-laws, nieces, and nephews.