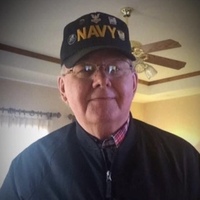 Tom was a proud American, having served in the United States Navy as a member of the Naval Construction Battalion (Seabees), protecting his country and fellow countrymen in the Vietnam War and reaching a top level of recognition.

In addition to his love for his country, Tom had a deep passion for music, which he spread to his children, grandchildren, and friends, inspiring them to make music a central part of their own lives. Tom once said, “Throughout my life, music has been my passion. In bad times, I’ve found it to be a comfort and, in good times, a means of celebration.”

And no one knew the rosters, statistics, and future outlooks of the Chicago Bears, White Sox, and Blackhawks as well as Tom, who needed to rush home from Sunday Mass in time to see the opening Bears’ kickoff.

Tom also loved to spend time on his boat, named the Seabee, especially on Table Rock Lake, and crafting furniture and other pieces from wood in his meticulously organized workshop in which he would always “measure twice and cut once.”

During his career, Tom became an expert within the heating, ventilation, and air conditioning (HVAC) field, having served as a technical information source for many HVAC technicians throughout the Chicagoland area during his career with South Side Control Supply Company and while teaching at Environmental Technical Institute (ETI).

Tom would often express his love for his family and friends by sharing an inspiring song, hosting a karaoke party, or offering an educational tidbit.

The celebration of Tom’s life will take place on Friday, December 9, 2022, with a visitation starting at 9 a.m. at St. Maria Goretti Catholic Church, located at 500 Northgate Drive in Dyer, Indiana, followed by his Funeral Mass at 10 a.m. Tom’s Mass will be followed by his Interment at 1 p.m. in Elwood, Illinois at the Abraham Lincoln National Cemetery, a cemetery dedicated by the United States Department of Veterans Affairs National Cemetery Administration, located at 20953 W. Hoff Road in Elwood, Illinois. Tom’s family would like to invite all to a luncheon in his honor immediately following Tom’s Interment at the Silver Dollar Restaurant, located at 422 E. Mississippi Avenue in Elwood, Illinois.

For further information, please contact 219-322-7300 or visit our online obituary and guest book at www.SMITSFH.com.