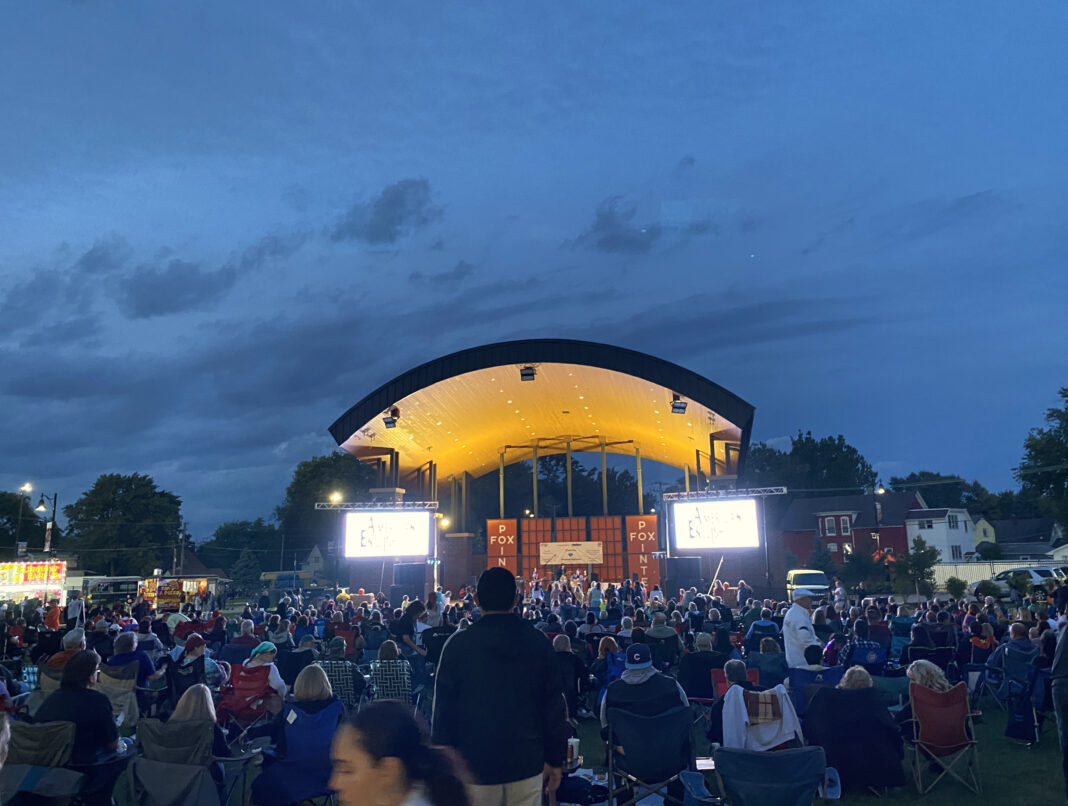 LANSING, Ill. (September 26, 2022) – It was 10 years ago in 2012 when Lansing Autumn Fest was introduced. “Bringing the Hometown Back to Lansing” was the tagline for the inaugural three-day festival. That first year it was held on an open grassy area with temporary tents, children’s activities held across Ridge Road near the clocktower and a chili cook off in what was then a firehouse.

Over the years there have been different activities added into the mix — a 5K, blood drive, bingo tent, vintage base ball, military band, high school play performances, a TF South reunion night, a new car raffle, an open mic night at Visible Music College, and more.

Even the dates have changed — from a three-day event in mid-October preceding Columbus Day to a two-day festival in late September. A pancake breakfast once held under a tent in the chilly morning autumn air is now held at The American Legion.

The fest was put on hold in 2017 during area construction and canceled due to COVID in 2020.

Improvements to the Fox Pointe site of paved pathways, fencing, and a permanent stage have made executing this large event easier for organizers. Although the fest has seen a lot of changes of the years, one thing hasn’t changed — the mission of bringing the community together and providing a free venue for friends and neighbors to gather to enjoy music, food and more.

The annual fall event held by the Lansing Association for Community Events (LACE) was another successful one with mostly-pleasant weather, a variety of food and marketplace vendors, a diverse musical line-up, activities for families, and a dedicated pool of volunteers.

Although temperatures dipped on Friday evening and the fest went out with some raindrops late on Saturday night, a steady crowd filed into Fox Pointe throughout the weekend. The lawn was full for the Saturday headliner, Latin Satin Soul.

“What an amazing show of support for LACE and Lansing Autumn Fest from the crowd and entire Village of Lansing,” said Jenny Polley, Entertainment Chairperson and Food Vendor Coordinator. “I knew our entertainment choices this year would be popular. It was exciting to be on stage introducing the bands while looking out at so many smiling faces.”

Involvement from volunteers plays a big part in the festival’s success and this year almost 100 students and about 40 adult volunteers helped make the fest possible. The majority of student volunteers come from TF South High School, but there were also 16 volunteers this year from Heritage Middle School as well.

“Lansing Autumn Fest has always been a community-wide event supported by countless sponsors and student and adult volunteers. This year proved no different with a packed lawn on Saturday night with great entertainment, food, and camaraderie. It makes me proud of Lansing yet again,” said Jake Gourley, LACE Director, Volunteer Coordinator, and TF South Principal.

An estimated 6,000 people attended the two-day fest at Fox Pointe.

The musical line-up is a focal point of the fest and entertainment could be found on two stages. The main stage featured several genres — from country to rock classics to Latin dance music and more. The KidZone stage included jugglers, a reptile show, dance party, and more surrounded by carnival games, bounce houses, face painting, and other activities.

Brenda Lazard of Lansing said the music is her favorite part of Lansing Autumn Fest. “I come every year for the music — and also the food,” she said. “I think it’s a really nice event — the biggest of the year.”

Fest-goers had nine food vendors to choose from with options that included ribs, kabobs, pizza, ice cream, shaved ice, hot dogs, egg rolls, “elephant ears,” and more. Lines formed at most vendors on Saturday and some items had sold out by early Saturday evening.

The Lansing Historical Society had a booth to share information on Lansing’s past and market place vendors offered a variety of craft items for purchase.

A draw in the region

The Lansing Autumn Fest crowd included plenty of visitors from neighboring communities and beyond. Bertha Goodrich of Munster has been to some of the Wednesday night concerts and returned for the fest on Saturday night. “I think this is really nice for families to be able to come out to. I don’t like bars, but like music and this is perfect,” she said.

Jerry Cordova of Highland was attending Lansing Autumn Fest for the first time. “One of my co-workers recommended I come to see the Beatles tribute band,” he said. “They were great. I love it. It was my uncle’s favorite band in the 60s.”

Joan Terry, who is originally from Calumet City and now lives in Griffith came out with a large family group that included nieces, nephews, great nieces and great nephews. “The fest is a really good thing. It’s a nice environment and a nice thing to do on a Saturday night,” she said. “It’s good to see so many families come out.”

John Buchanan is from Miami, Florida but said he had been to Lansing Autumn Fest a couple times in the past and was happy to return again this year. He gave good reviews of his corned beef egg roll from Vons Vittles. “I think this is amazing,” he said of Lansing Autumn Fest. “People can come out and come together and forget everything else.”

Showing appreciation for local military veterans has been an important part of the fest and in the last three years it has been expanded to honor first responders, as well. Jean McCall, Chairperson of the Hometown Heroes Military Tribute has been collecting photos that are part of an ever-growing slideshow of military and first responders with links to Lansing.

“The slide show is up to 143 slides including police, fire, Army, Navy, Air Force, Marines, Coast Guard, Homeland Security, and even Border Patrol. The slide show leads with Phillip Martini, then Ken Novak, then Nathan Goodman, and the fourth is Donald Disselkoen, who was killed in Vietnam. We obviously still need pictures of the other five Lansing boys killed in Vietnam,” she said. “The slideshow of our hometown heroes should keep growing to at least 300 slides, I hope.”

McCall said that she has gotten good feedback on the tribute. “Veterans seemed to appreciate the dialogue about the wars done this year,” she said.

McCall continues to accept photos to be added to the fest slideshow next year. They can be emailed to [email protected].

“To be eligible, you need to have grown up in Lansing or live in Lansing now or be a family member of a Lansing resident. We want anyone who puts themself in harm’s way — all first responders, all veterans, and we would love to add more Special Ops and DEA, etc.,” McCall said.

More information about LACE is available at www.lansinglace.com.