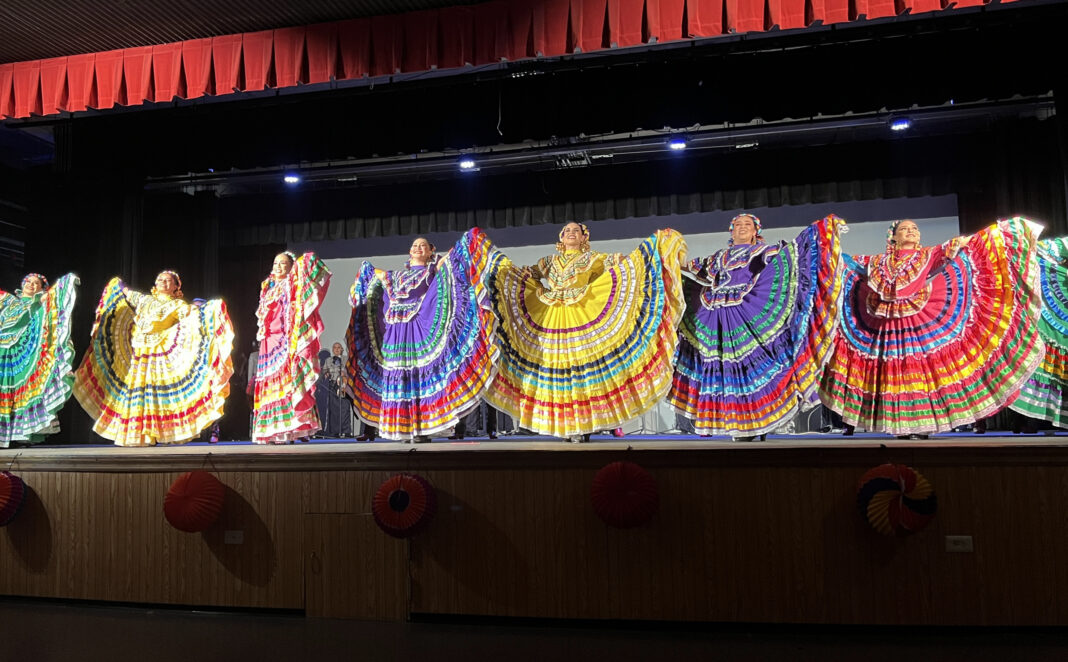 LANSING, Ill. (September 6, 2022) – On Saturday I had the privilege and pleasure of experiencing Mexico en el Corazón performed live in the Henry Hertz Auditorium at TF South High School. The Lansing Journal reporter originally scheduled to attend and cover the event had a last-minute conflict and asked me to fill in for her.

I looked forward to seeing firsthand what I had been reading about in recent Lansing Journal articles — Mexico En El Corazon is a touring production from Mexico featuring passionate singing, lively mariachi music, and spirited and colorful folklórico — the traditional dances from Mexico’s various regions and states.

As a reporter, I hoped to capture the experience of the event accurately — not only for readers, but also for the deserving performers, organizers, sponsors, and audience members that contributed their energies to the event. Since Mexico en el Corazón translates to “Mexico in the Heart,” I wanted to learn and to share what Mexico in the Heart means.

Arriving early, I observed many Mexican-American families — parents, children, grandparents — pouring into the auditorium lobby, speaking their native Spanish to one another. Here I must confess: attending the event as a non-Spanish-speaking “gringa” reporter, I felt somewhat sheepish and unqualified. I worried about how much the language barrier would interfere with my ability to understand what was happening on stage or how my non-Mexican ethnicity would interfere with fully understanding the cultural significance of the production to the largely Mexican-American audience.

Two friendly high school students stood at the auditorium lobby doors and handed out programs — printed in both Spanish and in English — and they greeted us with either a “Hello!” or an “¡Hola!” I took my seat in the auditorium and reminded myself of the advice I used to give my creative writing students in my former role as a high school English teacher: write about what is taking your attention.

Once the audience members were seated in the dark auditorium, the red curtains opened, floodlights hit the stage, and the Mariachi music began. What took my attention immediately were not only the talented vocalists, musicians, and dancers on stage, but equally the enthusiastic reactions of the audience members. In particular I loved hearing the distinct and varied gritos — expressions of joy or excitement for the mariachi music —of a woman seated near me. Whoops and trills erupted from her as she recognized each song, and she enthusiastically swayed and sang along in Spanish to the songs obviously so familiar to her.

After the two-hour pageantry of Mexican music, colorful costuming, and dance movement, the final song of the program inspired the entire audience to light up their cellphones and sing the Spanish lyrics together.

I wondered what the final song was about, and decided after the show to approach the woman who had taken my attention earlier. She was still seated with her adult daughter, Daniela Arriaga, who acted as a translator between me and her mother whose name I learned is Maria.

“I don’t speak Spanish,” I apologized. “Can you tell me what that song was about?” “The song is about return,” Daniela explained. Her mother, clutching her heart, nodded and said in English, “My home!”

Though I am not Mexican and though I do not understand Spanish, I witnessed Mexico en el Corazón evoking something in Maria and other audience members that is universal. Cultural heritage — expressed here through traditional song, music, and dance —engenders pride and joy and creates a bond that extends beyond sentimentality. It fosters family traditions and identity. Maintaining a connection with one’s homeland and sharing that connection with family is meaningful in all the ways the heart can know. In that way, I could understand “Mexico in the Heart” after all.