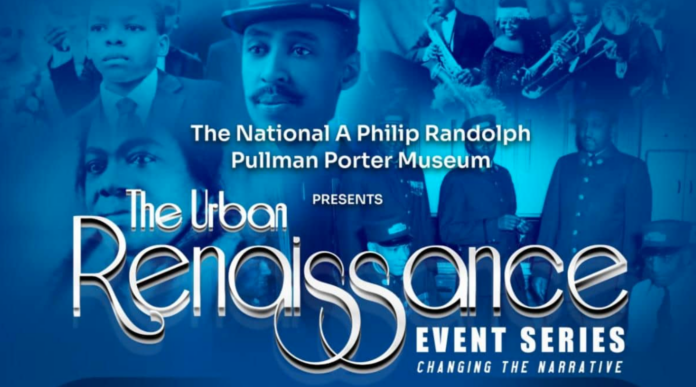 CHICAGO, Ill. (September 2, 2022) – The National A. Philip Randolph Pullman Porter Museum will celebrate Labor Day Weekend with the sixth Installment of “The Urban Renaissance Event Series” which pays tribute to and re-creates the energy of the Harlem and Chicago Renaissance periods through music, art, literature, and film.

The lineup of activities will be highlighted by a groundbreaking ceremony of the museum expansion project on Labor Day, September 5, at 11 a.m. on its campus at 817 East 104th Street in Chicago’s historic Pullman neighborhood The groundbreaking will be followed by a “Cultural Explosion” event from 2 – 9 p.m.

“Earlier this year, we announced plans of this expansion and have been working diligently to build public support, raise funds, and amplify the story of Black labor all in the name of realizing this vision,” said Museum Founder Dr. Lyn Hughes. “We have more work to do, and this groundbreaking serves as a catalyst for commitment by all stakeholders.”

Museum leaders have invited a host of public and union officials, community leaders, and advocates committed to shedding light on the impact of A. Philip Randolph and the Brotherhood of Sleeping Car Porters. Established 27 years ago, the Pullman Porter museum is the only one of its kind in the country.

The expansion of the museum, termed the “Community Economic Development Empowerment Project” (CEDEP 2020), is a multi-phase innovative plan that will include expanded galleries and exhibit space, revenue generating space and the Jesse Jackson Civil Rights Wing, complete with an elevator, to ensure handicap accessibility.

“We are poised to deliver a living, breathing Black labor historic, cultural tourism district known as ‘Randolph’s Way,’” said Museum President David Peterson, Jr.. “We are confident that the completion of this expansion will simultaneously launch a neighborhood stabilization plan providing employment and economic opportunities for the residents and businesses in our community and beyond.”

Peterson went on to emphasize that the anchor and crown jewel of Randolph’s Way will be the National A. Philip Randolph Pullman Porter Museum. A highlight of the district will be Pullman Porters Row, which is where new tourism and hospitality-centered businesses will be located. The project also includes the Jesse White Research Library and Gallery, the Dr. Lyn Hughes BSCP Ladies Auxiliary Women’s History Museum, and additional structures to be announced as the project progresses.

Entrepreneur and music industry executive Damon Dash will be participating in several of the Urban Renaissance events including a film screening, a children’s book launch, the “Paid in Full” Live Interactive Event at the Harold Washington Cultural Center, the museum groundbreaking ceremony, and “Cultural Explosion.”

Dash, the only non-labor or political representative on the roster, indicated his strong desire to speak at the groundbreaking as well as participate in the Museum’s annual free celebratory event “Urban Renaissance Event Series” which takes places from 2 – 9 p.m. on Labor Day. The event includes music, food, vendors, entertainment, speakers, and activities for children.

Dash shared that he is impressed with the unique direction that the National A. Philip Randolph Pullman Porter Museum has taken to ward off the “cultural appropriation” and the historic, cultural niche it has created in its 27-year existence in the Pullman District.

“This project will be life changing for the residents of a community that has suffered neglect for decades,” added Hughes. “Ironically, the end result will enable residents to begin enjoying simple things that are often taken for granted by residents who live on the south end of the district just five blocks away.”

The estimated timeline for completion of the project is September 2023. For more information about the National A. Philip Randolph Pullman Porter Museum, visit www.pullmanportermuseum.com. The museum is located at 10406 S. Maryland Avenue in Chicago.