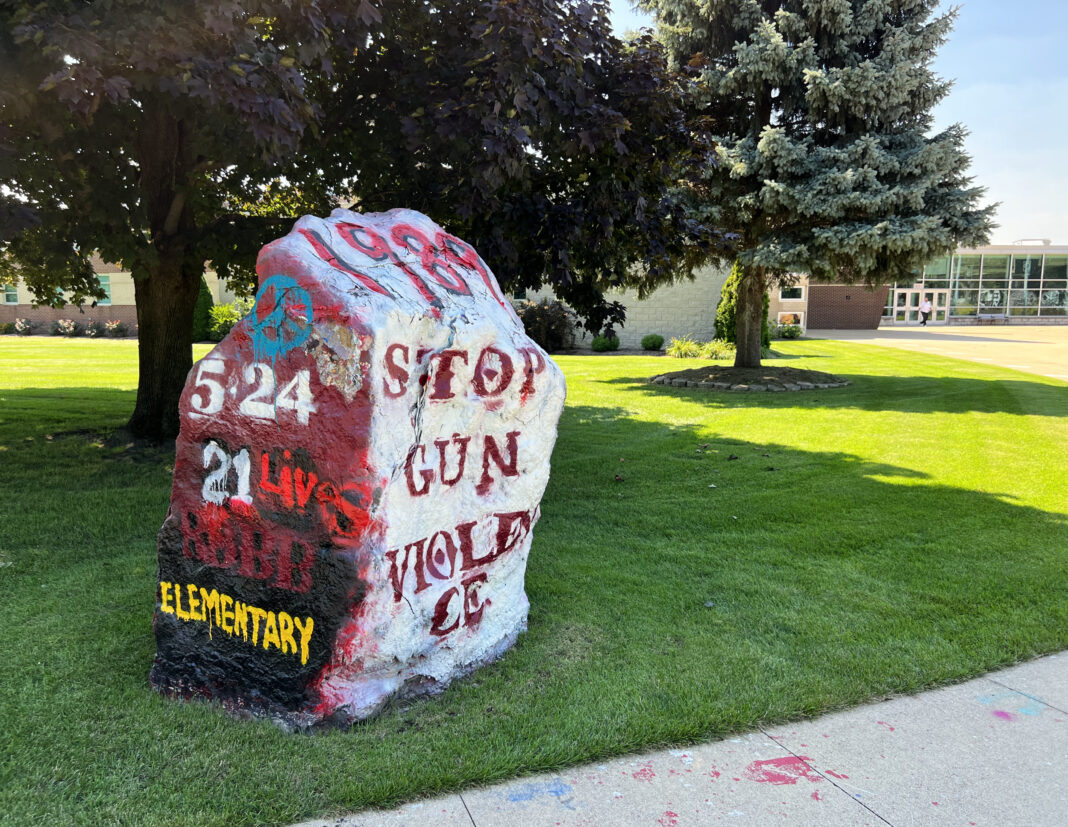 LANSING, Ill. (August 11, 2022) – There’s one place on TF South’s campus where graffiti is allowed. In fact, it’s encouraged. That place is Spirit Rock, a nearly six-foot stone that has served as a student mouthpiece since the 1970s.

Located near the main entrance of TF South and visible from Burnham Avenue, Spirit Rock was a gift from the Class of 1971, and has received many coats of paint — with many accompanying messages — over the last five decades.

TF South Principal Jacob Gourley said the rock initially served a dual purpose: to give students a “forum for expression” and to “prevent graffiti.”

“Here’s your blank canvas, if you want to spray on something, use this,” Gourley said, personifying early thoughts about the rock’s purpose.

Over the years, the rock has been used by countless groups of students to share celebration after a sports victory, mourning at the loss of a member of the community, messages of social justice, and sometimes simple cartoons.

“We as a school really have no say in who does what to that rock. There’s no approval process or permission,” Gourley said, adding that there is video surveillance near the rock in case something offensive were to take place. “That hasn’t happened in my principalship,” he added.

Beyond TF South students and alumni, the rock is also a public forum for the larger community, Gourley said.

As part of a Class of 1994 reunion, some former students attempted to steal Spirit Rock as a prank. They weren’t able to do any more than topple it, however. Gourley also said that despite a rumor that the rock started at TF North and was stolen and brought down to TF South, Spirit Rock has always belonged to South.

In 2005, the rock was moved to accommodate building expansion at TF South.

Jerelle Hale graduated from TF South in 2000, but returned to the school in 2020 in the midst of multiple racial-oriented protests during the summer. At the time, he helped lead a repainting of the rock to display a racial justice message including a clenched fist, the Juneteenth flag, and the messages “Say their names” and “Change.”

“It was supposed to be a day of healing. I invited Blacks, whites, Latinos, anyone [who had graduated] from 1995–2005. Anyone who wanted to come and participate and just revisit the school and heal some wounds that had never been healed before,” Hale said. “We wanted to show our support not for the group Black Lives Matter but for the message that Black lives matter.”

Hale said that, as a Black man, his time at TF South in the late 90s into 2000 was not without racial tension.

“During my years there [the school] started to have a real sense of diversity as a lot of Blacks and Latinos were moving in. There was a lot of rebellion. When I was there there still was the Confederate flag. We had a lot of racial unrest — I wouldn’t call it all-out war or anything like that — but it was a lot of the undertones. … We didn’t feel like we were truly equal at that point.” Hale said.

The gathering that Hale organized in the summer of 2020 brought 40–50 people to Spirit Rock to paint it with messages of racial justice. “That was what that day was supposed to be about: healing. And using the Spirit Rock as the mouthpiece for that healing in the midst of protests, and Black Lives Matter, and the George Floyd murder.”

Returning to school and Spirit Rock

Near the end of last school year, Spirit Rock proudly displayed the new nickname of TF South: Red Wolves. As of this writing, the rock’s messages are an example of its versatility as a community forum. While two sides of the rock display a message celebrating the Class of 1989, the other two sides call for an end to gun violence in memory of the Robb Elementary School shooting, which occurred on May 24 and killed 19 students and two school staff at an elementary school in Uvalde, Texas. Gourley said the gun violence messages were spearheaded by TFS’ Student Equity and Leadership group.

As a new school year begins in the coming weeks, the rock will continue to be a community canvas for messages of mourning, change, celebration, and anything else students, alumni, or the larger community wants to share.

“Thankfully, we have that Spirit Rock, that can be a mouthpiece for the times and what — not just America — but specifically what our community is going through,” Hale said. “At its heart that’s what it is: the mouthpiece of the community.”