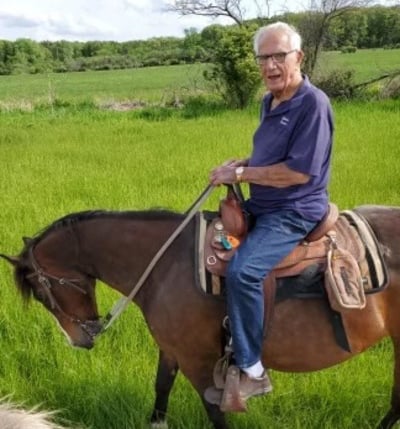 Paul Allen Gibson, 89, passed away peacefully on Tuesday, July 19, 2022, at home surrounded by his family. He was the oldest child of the late George and Ruth Gibson.

Paul was born in South Holland, IL, and attended high school in Mishawaka, IN. After high school Paul joined the Air Force and was stationed in Korea. Upon returning home, he met the love of his life, Betty who he was married to for 64 years. Paul worked for his father and later owned Gibson Chevrolet.

Paul enjoyed traveling around the world early in his life and loved the Florida sun when he retired. Throughout his life he rode horses, drove buggies, raised chickens and always had at least one faithful German Shepherd by his side. He delighted in competing with his horse and buggy filled with his grandchildren in the Lake County Fair.

Paul not only served his country, but also served at his church, Faith Church (South Holland/Dyer). He was a church plant committee member, a deacon, an elder, a small group leader (for the horse-lovers Bible study), and an usher for many years. His cheerful personality, positive attitude, and Christ-loving spirit made people feel comfortable.

A memorial visitation will be held Thursday, July 28, 2022, from 3 p.m. until the time of the memorial service at 7 p.m. at Faith Church, 100 W. 81st Avenue, Dyer, IN with Scott Gibson officiating. Burial will be held at Abraham Lincoln National Cemetery – Elwood, IL.