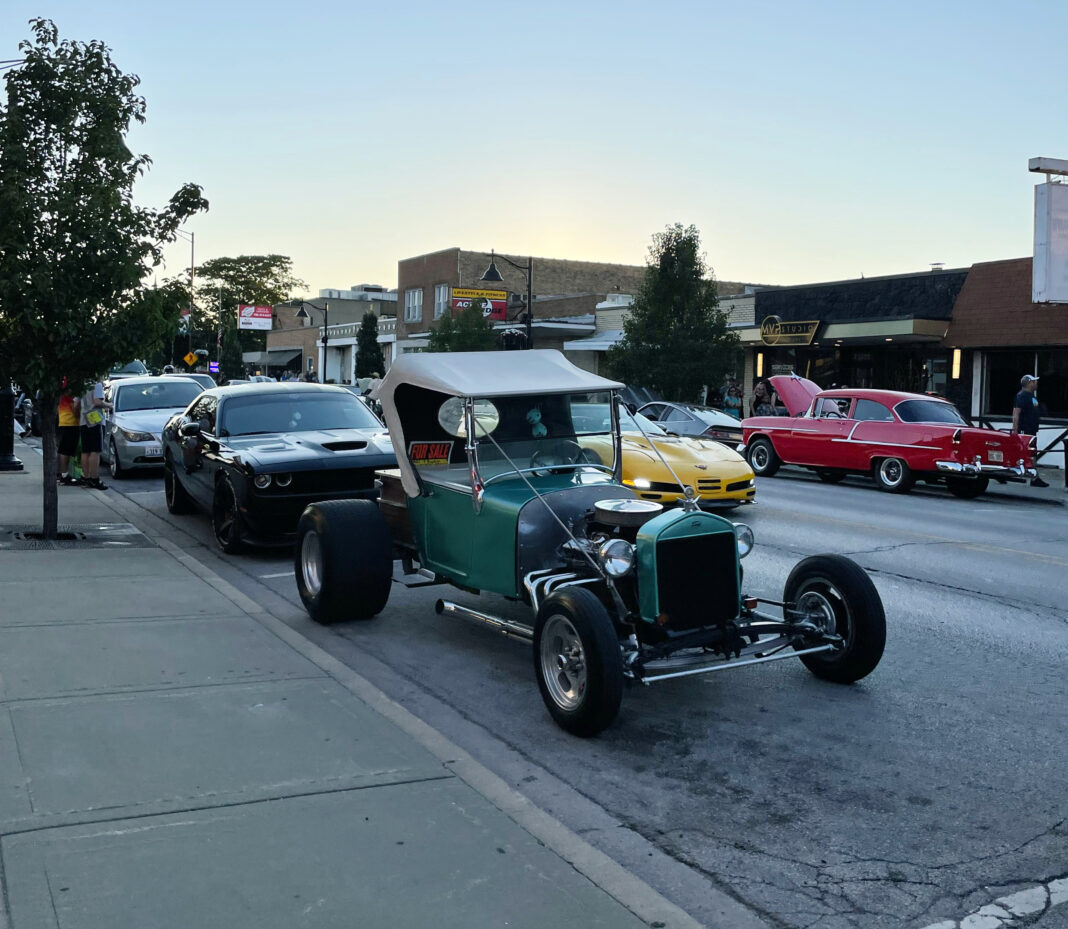 LANSING, Ill. (July 11, 2022) – Hundreds of people, from Lansing and beyond, gathered along Ridge Road for the second Cruise Night of 2022. This annual summer tradition always attracts large crowds, and the July 9 event was no exception. Dozens of hot rods, race cars, antique cars, and even motorcycles lined the streets of downtown Lansing.

Sponsored by the Lansing Association for Community Events (LACE), Cruise Night has been a longstanding tradition in Lansing. Each summer, LACE brings together car owners and enthusiasts on certain Saturdays in June, July, and August.

Cars run in the family

One of the car owners who took to the streets on July 9 was Jim Hunt, along with his wife Dawn and their collie Cassie. The Hunts brought out their 1989 Chrysler LeBaron Turbo GT, a car they have owned for 20 years.

“Cars have always been my passion, ever since I was a teenager. I’ve just always liked cars,” Jim Hunt said.

The car has come in handy not just for Cruise Nights: “The fun thing about this car, is this was our son’s ‘chick magnet’ car! This is what he drove around for his high school years,” Dawn Hunt shared.

That passion for cars runs in other families as well, including the Vasquez family. Saul Vasquez came out to Cruise Night with his 1968 Dodge Charger RT. He said his family, especially his father, played a major role in his enthusiasm for cars.

“Really, you don’t see anything like this anymore. It’s more of an experience than just an aesthetic,” Vasquez said of his and other Cruise Night cars. Vasquez has brought his car out four or five times now.

Along with the Hunts’ Chrysler and Vasquez’s Dodge, dozens of other cars could be found parked down Ridge Road, spanning nearly all the way from Burnham to Wentworth. Local businesses were bustling, such as Mancino’s and Gayety’s, and people were camped out with folding chairs along the road to enjoy the spectacle.

Some folks showed off their cars by driving down Ridge Road rather than parking. Some cars were literally jumping down the road, and others were driving on two wheels. Further down the road was Paul Brunetti and his 1967 Chevelle Sedan. Brunetti also cited family inspiration when it came to his passion for cars, stating that his mechanic brother was a huge influence.

“I always liked cars when I was younger and [I] finally got some extra money and [my brother] actually helped me with the car. A lot the work was done on it, but he helped me with the engine,” Brunetti said. Brunetti grew up in Lansing, near the current Cruise Night festivities, and still lives in Lansing today. He has brought his car to most Cruise Nights for the past seven years.

This month, the festivities spanned beyond Ridge Road as well, with a local band showcase taking place at Fox Pointe. Crowds gathered near the pavilion to listen to live music by Smolens and Friends, Glass Pack Rebels, The Rangers, and Not Dead Yet.