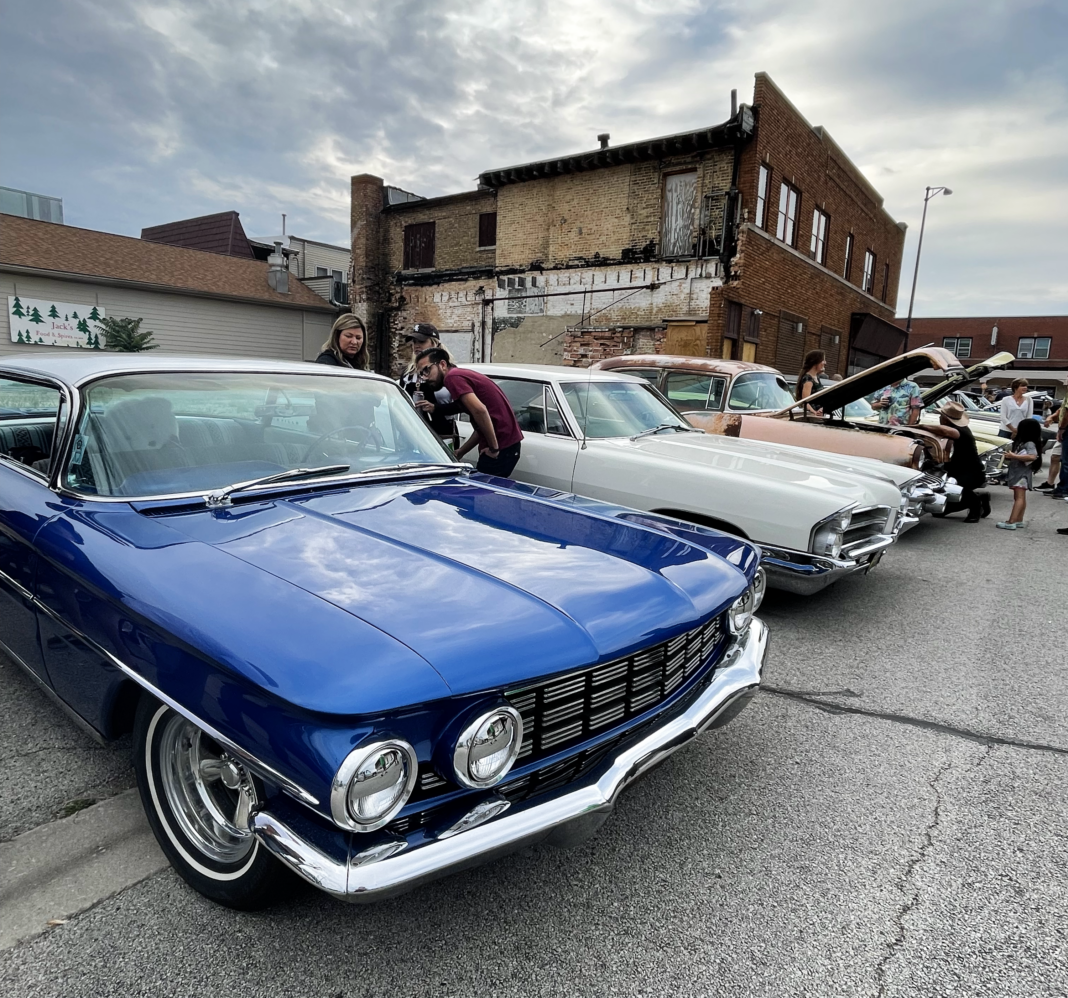 LANSING, Ill. (June 13, 2022) – Summer in Lansing officially kicked off with the first Cruise Night of 2022. An annual Lansing tradition, Cruise Night drew large crowds on Saturday, June 11. Although the skies were cloudy and there was a chance of rain, the weather didn’t ruin the fun; in fact, with steady temperatures in the 70s, the weather was perfect for a night spent outdoors.

On the street at Cruise Night in Lansing

Each summer, the Lansing Association for Community Events (LACE) invites car enthusiasts and owners to come together on the second Saturday of June, July, and August for cruise nights (with a fourth show taking place at Phillips Chevrolet scheduled for August 27).

Linda Manly is one of the owners that came out for the festivities, showcasing her and her husband’s 1985 Chevrolet El Camino. Featuring a custom wooden steering wheel and gear shift, along with wood paneling in the back, Manly has owned her El Camino for about seven years.

“[My husband’s] been working on cars since he was 13; he’s now 83. We retired and moved to Indiana and we’re finally able to afford such a beautiful car,” Manly said.

The white El Camino was parking along Ridge Road, along with countless other hot rods, antique cars, and even race cars. Dave Dotter, a mechanic from East Hazel Crest, spends his free time building and repairing race cars. He is also the owner of a 1960 Oldsmobile Super 88.

“I repainted it, we redid the interior a little bit. It didn’t need much body work luckily; we did the little body work it needed done. It had a bunch of chrome badges … I eliminated most of them. We did very little custom work to it, but I feel it’s made it a lot nicer car than it was and apparently a lot of people here seem to like it too, which makes you feel pretty good about what you’ve done to it,” Dotter said.

Two people who enjoyed Dotter’s car, among many others, were Jeff Jackson and his stepson Paul. Jackson, a new Lansing resident, was excited to attend his first Cruise Night.

“This is our first time at Cruise Night, and we’re both having a great time. We love checking out all different cars and walking through downtown Lansing. We will definitely be back for the July and August Cruise Nights,” Jackson said.

As the night went on, more and more people descended upon Ridge Road. Local businesses like Beggars Pizza and Kdulche Café set up tables for customers outside, while Pour on Roy and Gayety’s welcomed the masses inside.

Across from Gayety’s was Calvin Jackson with his 1980 Oldsmobile Cutlass Pro Am. He has owned the car for the past seven years and has been bringing it to car shows for the past five years. Jackson’s all original car features crushed velvet seats and a “real seven engine.”

“It’s just nice to drive around in, [but] I hardly drive it. I mostly put it in shows,” Jackson said. “I just like cars. I just like getting them and fixing them up…I’ll never sell it because you can never find a car like this up here!” (Although he does plan on passing it on to his three sons in the future.)

Cruise Night has grown into a favorite Lansing tradition, and many folks consider it a family tradition, too. Diego Martinez, his wife Genesis, and their soon-to-be 3-year-old daughter enjoy coming to Cruise Night each summer.

“We like coming to Cruise Night because we made it a tradition. I’ve been living in Lansing for a while now, so when we got married, I told [Genesis] about it. We remember the first time we came, and she really liked it … We like seeing the cars and just being around everyone. We like the people that come. With the pandemic, everyone stayed in their homes. Now, it’s good to be out and about again,” said Martinez.

Subsequent cruise nights will take place on July 9 and August 6 on Ridge Road in downtown Lansing, plus the August 27 show at Phillips Chevrolet (17730 Torrence Avenue). For more information about Cruise Night and other Lansing events, visit lansinglace.com.