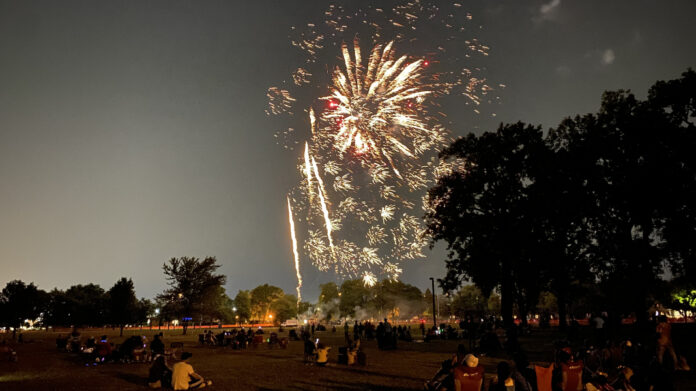 Do’s and Don’ts for a safe and legal summer

LANSING, Ill. (June 12, 2022) – As anticipation for Fourth of July increases, so too does the drum of at-home fireworks that can be heard locally. The Lan-Oak Park District will again host its fireworks ceremony on Sunday, July 3, 2022, at Lan-Oak Park, though local displays are bound to occur as well.

The Lansing Fire Department and Police Department provided answers in 2021 to some common questions Lansing residents might have about at-home fireworks.

Are fireworks legal in Lansing?

Per state law, consumer fireworks — meaning the type you can buy at a store in Indiana, for example — are illegal in Illinois. Not only is igniting fireworks against the law, so is possessing them.

Can I use smaller fireworks and sparklers?

Lansing’s Village Code specifies the exceptions to the fireworks ban, including sparklers, snake pellets, smoke devices, “party poppers,” and cap guns. Roman Candles, bottle rockets, firecrackers, and other explosives are illegal, however. In general, if a firework contains an explosive compound, it is prohibited.

What happens if I get caught with fireworks?

“We’ve got a zero tolerance policy,” said Lansing Police Department Sergeant Chuck Weeden last summer, “so we’re not writing any warning tickets. We are confiscating and we are writing ordinance citations.”

Weeden explained that even if someone gets pulled over for a speeding ticket and an officer spots fireworks in the back seat, they can be cited for possession.

Weeden said the citation amount can vary, but the hearing judge usually cites residents around $250.

Will I really get caught?

That’s hard to say. Lansing Police and Fire Departments will be enforcing Village ordinances, especially on Fourth of July weekend. However, large holidays like Independence Day tend to bring in other emergency-related calls. Additionally, the amount of at-home fireworks is usually more than either department can handle.

“Being so close to the state line, it’s a losing battle when it comes to enforcement,” Zigterman admitted in 2021.

Weeden echoed the sentiment, explaining that even if an officer responds to a call at a house that was setting off fireworks, the display might be done by the time the officer arrives — and by that time the officer has another house to check out.

Isn’t there a legal way to do a fireworks display?

Only pyrotechnicians that are licensed with the Illinois State Fire Marshal are allowed to operate fireworks displays.

In addition, a permit is needed from the Village of Lansing to conduct a fireworks display. Zigterman explained that a 75-foot radius of clear space is needed in every direction from a staging area, which would disqualify most residential properties in Lansing.

Why are fireworks illegal?

In short, safety. Although most at-home displays end without injury or incident, some do not.

“What we see is burns, hand injuries, eye injuries, and face injuries,” Zigterman said of common paramedic calls around the Fourth of July. “Fireworks are very dangerous if they’re not used with the proper training.”

He also mentioned garages are usually prime candidates for a fire hazard, and LFD usually receives calls about fire incidents around July Fourth.

Weeden said, “The potential for damage because of the dryness is greater this year than it has been in past years. …Fireworks are very dangerous. Leave it up to the professionals.”

But if I’m safe, and I know what I’m doing, who am I hurting?

First of all, accidents happen and are never planned for. Even the safest of displays can backfire.

In addition, there are many in Lansing who are negatively affected by fireworks. Lansing resident Virginia Ulaszek, for example, said in 2021 that her dog refuses to go outside while fireworks are being discharged, causing a potential mess indoors. Some animals are even more traumatized, and their owners try everything from “thunder shirts” to medication to protect their pets from the stress.

People can also be affected. Loud noises can trigger post-traumatic stress disorder (PTSD) in some individuals. Others may not have the luxury of a day off over the weekend, and could struggle to sleep through the noise.

“I’m hoping and praying that we won’t have a repeat of what has happened in prior years when fireworks became a nightly occurrence for two weeks before the Fourth of July and 2-3 weeks after the Fourth of July,” Ulaszek said in 2021.

Can I report someone who’s setting off fireworks?

Yes. The police department’s non-emergency number is best for fireworks complaints, which the department treats as noise complaints. Weeden said it’s helpful if callers have not only heard fireworks, but have seen them, and can provide LPD with a location.