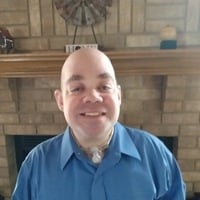 Although he was born in Crestwood, Illinois, he called St. John, Indiana home for decades, where he lived with his mother and father. PJ found happiness in everyday life: cheering on his favorite teams, particularly the Chicago Cubs; debating who made the best burgers; drinking soda pop; and reciting lines from his favorite movies.

PJ was particularly fond of warning his friends and relatives that they’d “shoot their eye out, kid” or that they “were NOT the father.” Additionally, every morning he’d place an order for steel with Pete Rush that somehow failed to get delivered.

Heaven will be a better place with PJ overseeing its cornhole tournaments, debating the top NASCAR drivers alongside Dale Earnhardt, his own favorite, and booing the Green Bay “Slackers” and New York “Damn” Yankees.

PJ’s sunniness will be greatly missed by all those with whom he came in contact, but particularly the Notre Dame and Indy 500 crews, the Dairy Queen team, his many aunts, uncles and cousins and, most especially, by his parents Dennis and Mary Rohe; his two brothers Sean (Marie Manning) Rohe and Glenn (Tricia) Rohe, his niece Alyssa and two nephews Bryce and Mason.