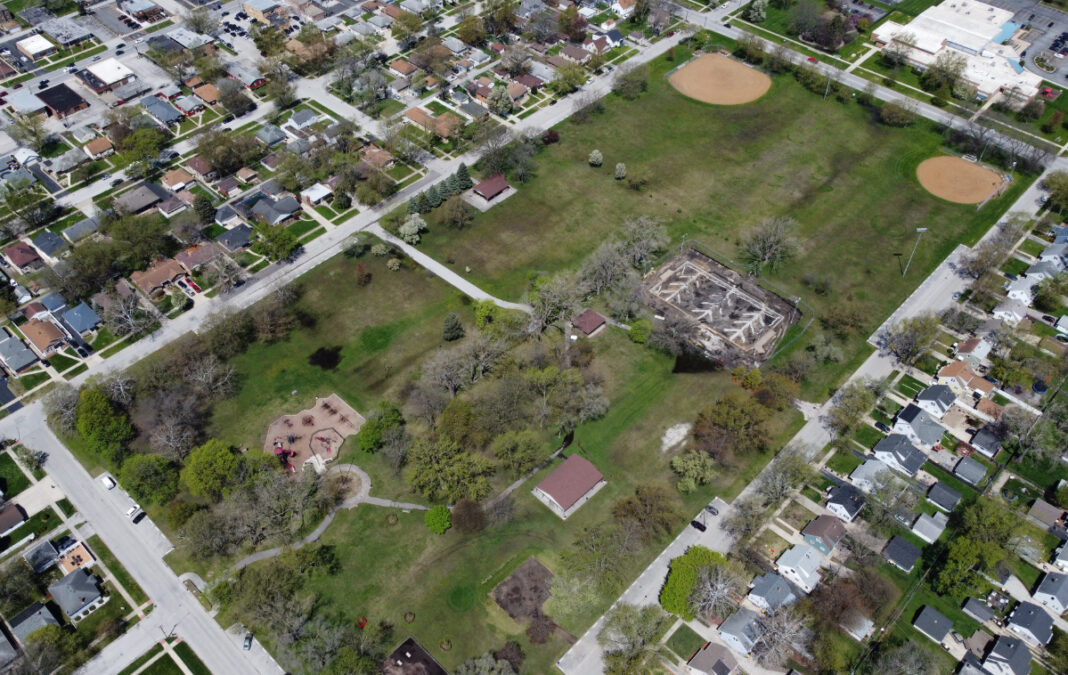 LANSING, Ill. (June 2, 2022) – Lansing families owe a debt of gratitude to Dorothy Olas and all who joined her in 1947 in a mission to create a place for children to play. Their work led to the development of Lansing’s first park — Lan-Oak Park.

From pinochle to Board meeting

Olas was president of the Meld Club, a group of eight women who gathered to play pinochle. Over cards, the women discussed the need for a safe place for children to play. They appointed Olas as their spokesperson. As such, she attended a Village of Lansing Board meeting in April 1947 to ask if there was any way to acquire land for a park.

Mayor George Jones shared Olas’s dream to have a place for Lansing children to have fun, but he informed Olas that, regretfully, no funds were available for a park. He said if she could find a way to get the money, he’d support the development of a park.

Olas was a very active and influential member of several service groups, so she invited eight representatives of eight organizations to a meeting. By the end of the meeting, those eight people were members of the Playground Equipment Organization. Their goal was to raise the estimated $900 needed for playground equipment. They succeeded in raising over $1,200 through donations, talent shows, dances, raffles, and solicitations. Those funds were used to purchase ten pieces of equipment, including two merry-go-rounds and slides.

Creating a Park District and Board

So now they had funds for park equipment, but no park to put it in. True to his word, Mayor Jones, along with Delphus LaTulip, George Schultz, Mildred Young, Dorothy Olas, and Charles Gabriel, circulated petitions for a special election to create a park district and park board. O.I. Lewis, Village Attorney, submitted the petitions to the Cook County Clerk. Permission was granted, and on April 19, 1949, a special election was held. Votes cast included 733 in favor of creating a park district and governing board, and 210 opposed.

The next month, the courts approved the organization of the board as well as the ability to tax for revenue. This group of motivated citizens now had funds and a park board — consisting of Dorothy Olas, Mildred Young, Delphus LaTulip, George Schultz, and George Gabriel — but still no land for a park. Again, residents stepped up to meet the need. Twenty acres of land, located south of 178th street and east of Arcadia Avenue, was donated by William and George Schultz, Gus Bock, and O.I. Lewis. The land was just a corn field, and no roads led to it. Additional funds were necessary to develop the newly-created park.

From corn field to park

Board members explained that a sale of tax warrants was necessary to obtain funds for the 1949 operations, since tax money wouldn’t be forthcoming until 1950. The board budgeted $10,013 for the fiscal year, including $4,500 for materials to construct a shelter and $1,500 to purchase tools to be used in the operation of the park. Appointments were made to carry out the process by which the board could borrow money against anticipated taxes.

The board of commissioners went to work very early after they acquired the park. Committees were formed in June 1949 to study plans for constructing a closed shelter, installing drinking fountains, and planting shrubbery and trees. Volunteers and civic-minded organizations in Lansing did most of the development of the park.

Now Lansing had a park, money to operate it, and playground equipment. All that was left was to give the park a name. School kids were challenged to participate in a contest to name the new park district. Two first-graders — Joe Koselke of Coolidge School and Janet Barkow of St. Ann School — submitted the same name. “Lan-Oak” was their way to honor the two early settlements of Lansing and Oak Glen. So Lan-Oak became the name of Lansing’s first park as well as the new park district. Koselke and Barkow were each presented with a $25 savings bond as a prize.

Incidentally, Janet Barkow (now Bockel) said she has no recollection of the contest or the savings bond. But newspaper accounts list her name along with Joe Koselke’s. In addition, Linda Koselke — who later married Joe — remembers that he shared the naming rights with Barkow. In fact, Linda remembers a photo of Janet and Joe and the Lan-Oak Park sign — that photo used to hang in the Eisenhower Center, which now serves as the main headquarters for the Lan-Oak Park District, but it was moved during a remodeling, and is currently missing. A photocopy of the photo was found in the Lansing Historical Society files regarding the 1976 centennial.

Joe Koselke died in 2020, and Linda participated in the park district’s Living Tree Memorial program in remembrance of him. From the list of approved trees, she purchased a Sugar Maple for Joe — “The kind that turn really red in the fall,” she said. It is planted in Lan-Oak Park, and Joe Koselke’s name is engraved on the Tree Memorial Plaque at the Eisenhower Center. Linda and Joe Koselke’s son Ken died in 2019, and their daughter Kara died in 2021, so Linda requested Sugar Maple Memorial Trees for all three of them.

The missing section of Arcadia was one of the major drawbacks to easily accessing the park. So in their 1950 street program, the Village gave top priority to opening Arcadia Street. The project was financed by the state’s gasoline tax rebate program.

Planners had hoped to dedicate the park and the Arcadia Street extension in 1950, but the park board decided to postpone that until the summer of 1951, when the work would be fully completed. Dedication of the new shelter would go on as planned in September 1950.

Part of a growing community

In 1951 the board hired George Molenhouse as the first Park Superintendent. He remained in that post for 23 years, until his death on January 23, 1973. (As a side note, Molenhouse also founded a zoo in Lansing in 1970. The Molenhouse Zoo held more than 50 animals — including two bison — all donated. The two bison met an unfortunate end when mischievous kids cut the padlock on their cage, setting them loose in Lansing streets, where police were forced to shoot and kill them. The zoo was closed in 1974 when the Park Board voted against holding a referendum to raise $45,000 for upkeep of the animals following Molenhouse’s death.)

The mission of the Lan-Oak Park District became: “To strive to enhance the quality of life for all Lansing residents by providing clean, safe parks, well-developed recreational facilities in a wide range of recreational programs and activities for all ages.”

Growing and serving and adapting

Seventy-three years later, the Lan-Oak Park District has garnered 170 acres of park land, most of which was donated by individuals or organizations. The park district website lists 19 parks, and Lan-Oak Park is the largest, at 20 acres. In addition the park district manages the Eisenhower Center, a full-service fitness center comprising a pre-school, a 25-yard lap pool, and a wide variety of special programs. North of the Eisenhower Center parking lot, the Mildred Burt Nature Center features a Chimney Swift tower for the migrating birds. Lan-Oak Park District provides facilities for a wide range of sports, activities, and classes, serving every age from infants to senior citizens.

Lan-Oak Park might be considered the crown jewel of Lansing’s park district amenities. As Lansing’s first and largest park, it embodies community spirit in its formation as well as its continued service. Ordinary residents cast the vision and brought it to reality. And now, generations later, families meet each other at the playground, seniors gather for horseshoes or bags, dog-walkers put in three-quarters of a mile by circling the perimeter of the park, and soon volleyball enthusiasts will enjoy new sand courts.

As a larger expression of community and tradition, Lan-Oak Park will host the annual July 4 fireworks display this year on Sunday, July 3, from 7:30 to 10 p.m. The Independence Day celebration has seen change throughout the years, in response to the changing needs of the community. What was once a full day of entertainment, games, and food vendors now focuses on the evening fireworks display, while families host their own gatherings in or around the park.

More information about the fireworks event on July 3 is available on the Lan-Oak Park District’s online calendar: https://www.lanoakparkdistrict.org/event/july-3rd-fireworks/