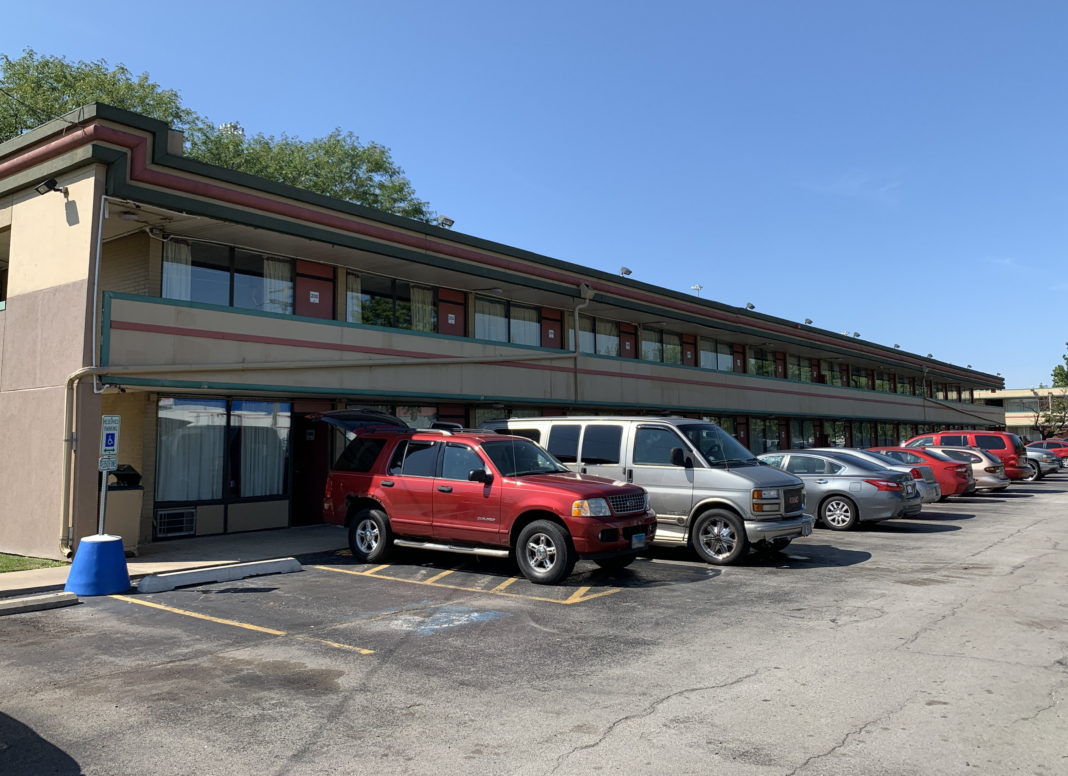 LANSING, Ill. (May 27, 2022) – From January through April of this year, Lansing Police Department officers have checked in on — or been called to — Lansing hotels over 1,500 times. Most of these visits are routine walk-throughs, well-being checks, or responses to disturbances. But sometimes officers go undercover in order to police the prostitution that is too common in Lansing hotels.

Prostitution is illegal throughout the United States, with the exception of 10 counties in Nevada. Yet the practice continues, and as the world has evolved, the “oldest profession” has evolved as well.

Prostitution is a consistent problem in Lansing, usually taking place in one of the village’s 10 hotels, all located near the 80/94 expressway. LPD Detective Lieutenant Scott Bailey said since last summer, each prostitution sting in Lansing has resulted in 14 arrests, on average.

“We try to get these stings as often as we can. We do quite a few a year,” Bailey said, though he declined to share the exact number of stings that have occurred recently so as to not compromise the department’s covert approach.

Starting on the internet

The idea of bursting through a door and catching someone in a lascivious act is largely reserved for television, Bailey said. For its regular stings, Lansing collaborates on investigations with the Cook County Sheriff’s Vice Unit, which is dedicated to prostitution-curbing efforts.

The first step in a prostitution sting usually starts on the internet. An officer, either from the LPD or the Sheriff’s Office, uses any number of websites on the shadier parts of the internet to identify either johns (men looking for sex-related services) or prostitutes (someone offering sex-related services). Officers will sometimes create fake accounts on a website to pose as either a john or a prostitute to gather information.

“I’ve looked at some of [these sites] and I say, ‘Where do you even come up with this stuff?'” Bailey said. “It’s just crazy the different websites and communication sites that people go to to try to cover up what they’re doing. They go through all lengths and ways to try to get what they want.”

Police-initiated online interactions will bring johns or prostitutes to a specific Lansing hotel on a determined date during what’s typically an eight-hour period. From there, undercover operations come into play.

“[The undercover officers] are witnesses when it comes to court proceedings on the activities that took place,” Bailey said.

Of the 14-arrests-per-sting average, the vast majority are johns. To arrest someone soliciting sex services, Lansing Police need evidence of both an intention and an act. For example, if during a routine traffic stop an officer encounters someone that LPD has observed soliciting sex acts online, the officer cannot arrest that person for soliciting prostitution, as no action has been committed.

“There’s not much we can do as far as charging them for a sex act, but at least they now know that we know who they are,” Bailey said.

LPD’s arrests usually come before any sexual acts have been committed; if someone enters a hotel after arranging online to receive sexual services at that hotel, that’s enough to arrest them.

In one striking incident last year, LPD arrested a man as part of a sting operation, and then found he had three children waiting for him in his car. LPD contacted DCFS and the man was charged.

Prostitution — at what cost?

There’s no consistent going rate for sex-related services, Bailey said: “It could be $25, it could be couple hundred, to maybe a couple thousand. It can vary. It’s a wide range depending on who’s desperate, who wants it, and who knows how much money they can get.”

Bailey also said it’s not uncommon for drugs to be used in prostitution-related transactions.

The cost for those who get caught is at least $500 in the form of a municipal fee.

“We know we’re not going to stop this, because this is the oldest profession in history, but we’re doing what we can to deter this type of behavior here in Lansing. If they get a Lansing fine of $500–750, hopefully they’ll take their business elsewhere,” Bailey said.

Beyond the Lansing fee, however, offenders could still be subject to additional fines through the Cook County legal system, as well as jail time. In Illinois, prostituting oneself is a Class A misdemeanor, which could result in up to a year in jail, and a fine of up to $2,500. For a john, “solicitation of a sexual act” is also a Class A misdemeanor, while “patronizing a prostitute” is a Class 4 felony, punishable by 1-3 years in prison and up to $25,000 in fines.

“It’s an organized crime when we’re dealing with prostitution,” he said. “You could have one individual renting out a few rooms, and keeping track of the rooms. That person may be working with someone else.”

Routine checks at hotels to observe frequent vehicles and individuals help combat this, as well as working with hotel management to consult room and vehicle records.

Unfortunately, the Lansing Police Department isn’t always responding to adults engaged in prostitution. Bailey said he’s been struck by how many juveniles LPD has come across in their sting operations.

“I’d say the majority — mostly all — of the juveniles we come across are on the prostitute end,” he said, adding that prostitution could look like an attractive option to someone who’s struggling early in life.

“Being so close to Chicago with poverty rates in some sections being so bad, coming to Lansing and staying in a hotel without a leaky ceiling, and you’re not getting rained on, and you’re not freezing to death, this is like coming to Disney World to some people. It’s a way of getting away from the worst, and people are doing what they need to do to survive,” Bailey said.

In some instances where suspected trafficking is involved, LPD works with federal investigators. “We partner up with the FBI when it comes to human trafficking because we’re so close to the Indiana border,” Bailey said, adding that Lansing hasn’t seen many human trafficking cases lately.

Minors involved in prostitution are not subject to fines or jail time.

In addition to investing time and effort into undercover police efforts, LPD also uses everyday deterrence methods. Police perform an average of 13 hotel visits a day, Bailey said, and those visits can include a wide variety of policing activities.

Officers will walk around buildings, chat with hotel staff, check in with managers, park squad cars in parking lots, and perform other activities to deter criminal activity in Lansing’s hotels. Sometimes something as standard as a seatbelt checkpoint on the street in front of a hotel can serve a secondary purpose to spook away johns, pimps, and prostitutes.

“We would love to eliminate it, and we’re doing everything we can do to keep from happening not only on the prostitution end, from bringing people in to commit other criminal activity,” Bailey said.

While he believes most of the prostitution activity in Lansing comes from outside of town, Bailey hopes the community will contact LPD with any suspicious activity that they observe, such as frequent comings and going at an apartment complex.