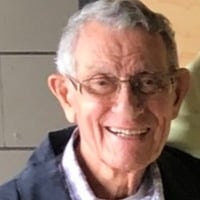 Born in South Bend Indiana in the shadow of Notre Dame University July 15, 1926, to John Joseph Flannery and Frances Marie Bashara. The attending doctor commented “Frances, you have two identical golf caddies”. Their father was a chemical engineer, and, with the Depression, jobs were scarce. John enjoyed early life, learning Morse Code, setting up telegraph stations throughout the house and building radio crystal sets. Four different primary schools, in different states, was confusing to their teachers. Two years in Detroit’s Edwin Denby High School, and two years in Chicago’s south side Hirsch High School led to graduation in June 1944.

World War II — the draft was on. The Army’s policy was “to stay together you have to enlist”, which they did, and stayed together, and were assigned to the 100th Infantry Division. Middle Eastern Theatre ribbon with one Bronze Battle Star, Victory, Army of Occupation, Germany and Good Conduct Medals led to the Combat Infantrymen’s Badge.

Freedom after seven years of college was golf, and sailing their 30-foot sailboat “Windquest.”

During John’s early years of practice in Chicago’s south side, along with Patrick, they were among other dentists that contributed their services to the Lt. Joseph P. Kennedy Jr. School for Exceptional Children in Palos Park Illinois — a most rewarding experience.

After several years of practice in Roseland, their home and final location for their dental practice was South Holland, IL. There the doctors had built their own dental building for general dentistry and Orthodontics.

For 50 years John and Patrick had each other as consulting partners, as it was throughout their entire lives, also, both were life time members in the American Dental Association, and the Chicago Dental Society.

Many thanks to the “Honor Flight Chicago” organizers for WWII, Korean, and Vietnam Veterans on accepting the Flannery twins to visit the War Memorials in Washington D.C.