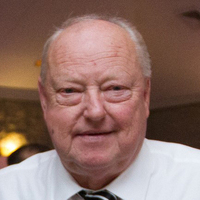 Conrad will be remembered as a devoted, loving husband, father, grandfather, and great-grandfather. He was loved by many and could light up any room he walked into. He was always the center of attention and could always garner a laugh out of just about anyone. He was the ultimate jokester and well known for his “fart machine” pranks. Literally everywhere he went, he made people laugh and smile.

He was a long-time loyal employee of FleetPride Truck and Trailer Parts (formerly Midway Truck Parts) from where he retired in 2021. Conrad started his sales career when he was approached by Doug Smith (a parts sales man for Century Clutch and Brake) while he was working at Kickert School Bus line as a parts manager in 1976. Doug told dad that he had a funny and charismatic personality and that he would make an excellent salesperson. He had a successful career and sold truck parts for 45 years after that.

He served in the United States Armed Forces — Army National Guard of Indiana from 1966–1972. Specialist Conrad L. Kats Jr. qualified as a sharpshooter with M14 and was a 12B Construction Engineer. Conrad was an avid history lover and loved to watch and read the history of WWII. He loved war planes and spent a lot of time putting together models. In his youth he enjoyed drag racing at US 30 dragstrip in a 55 Chevy that he called the “Street Cleaner.” He was always a perfectionist when it came to any kind of vehicle. For years he would buy classic cars to fix up and resell.

Conrad loved the Lord and had a true gift for leading prayer. Conrad and Cindy raised their children in God’s word. They made it their mission in life to bring people to the Lord. Many friends and family members were often invited to church with the lure of an awesome Sunday dinner of pot roast and mashed potatoes to follow. Their generosity and friendships were often cultivated over a meal.

Conrad was a friend to all, there was never a stranger that entered his home. He will be missed by masses.