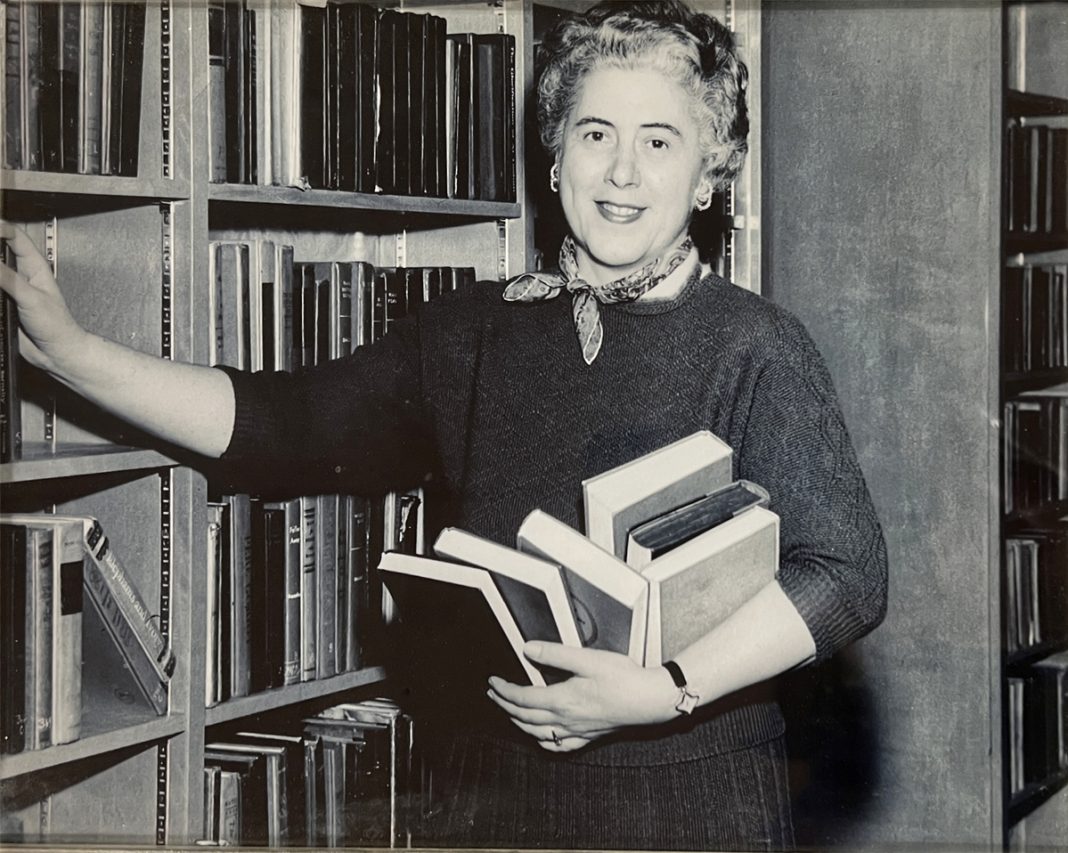 From flashlights and coal, to storm doors and oil, Winnie Edwards ensured the library could meet the needs of a growing community

Above: Winifred Edwards Gaetze served as head librarian for 20 years. This photo and a plaque hang in the lower level of the current library building at 2750 Indiana Avenue in Lansing.

LANSING, Ill. (March 16, 2022) – Do you remember when you walked into a library you were told to turn off your “voice box”? If you didn’t, the librarian would put her forefinger to her mouth, purse her lips, look sternly at you and exhale a “Shhhhh.”

It’s been said that head librarian Winifred Edwards was one of the best “shushers.” Affectionately known as “Winnie,” she was appointed the fourth Lansing head librarian on February 11, 1946, in its third location since its inception in 1936.

The library began as a WPA (Works Progress Administration) project and was located in the old Lansing Bank Building. The WPA furnished the books and a librarian. The second library was in the former “Star Store,” and in 1938 the third library location was the old pump house on Chicago Avenue.

When Winnie was librarian, that old pump house had no storm windows, and the walls were bare brick. It was cold and dark in the winter and hot and dark in the summer. The two light fixtures didn’t provide much light, so Winnie often used a flashlight to find the books.

On May 1, 1941, Lansing voters elected to make the library a tax-supported institution. This funding enabled them to purchase an oil stove and get rid of the coal stove. One of the duties of the librarian was to fill the stove on weekends so the fire wouldn’t go out. Of course much of the heat went to the ceiling, but at least there was a fire in the stove when Winnie opened on Monday morning.

A year after Winnie was appointed, the library finally got storm windows and a storm door. Further progress was made the next year when the oil tank was connected to the stove, so Winnie didn’t have to go in on Sundays to fill the tank. Another year saw the old floor covered with new linoleum. But so much more needed to be done.

Winnie was visiting other libraries and attending workshop meetings held by the State Library in order to learn how to improve Lansing facilities. Big things were being planned. By 1950 the remodeling began and an automatic furnace was installed.

The board had purchased property on the corner of Chicago Avenue and Ridge Road and by 1954 made the last payment. Their goal was to build a new library that could meet the needs of a growing community. At that time Winnie said, “I have watched your children grow up. Many of them correspond with me. Almost all come to see me when they come home to visit. The ones who have stayed here, I count as my close friends. In the past eight years I have received only kindness from all of you. I hope I can work with you for a long time to come.” And she did, for another 12 years.

In 1956 Lansing citizens voted to build on the purchased land. Winnie’s genius solution to moving the library’s inventory was to ask patrons to check out extra books before the move and then return them to the completed building later.

Winnie retired in 1966. According to her granddaughter, Susan Teller Bovino, Winnie and her husband Francis (Fran) began traveling with a small camper in tow, enjoying the outdoors in many states. “They didn’t require much to enjoy retirement,” said Sue. “Fishing, collecting wild berries, visiting many friends, and enjoying family during their winters and summers in Texas and Minnesota.”

Sue also remembers that her grandmother was an avid gardener and read multiple books each week. “She rode a large tricycle up and down Ridge Road to keep fit, and she mowed her lawn well into her 80s,” Sue said.

She added, “I have so many wonderful memories of my Grandma Winnie. I always looked forward to her small desserts in the evenings. When I was very young, she’d cut up an apple and I’d have to “fly” around and tweet like a birdie to get a piece of apple. Grandma had a small organ and she’d play various tunes, but I mostly remember, ‘I’m a Lonely Little Petunia in an Onion Patch.’”

Winnie died October 1, 2005, at the age of 94. She was a resident of Lansing for 73 years and was head librarian at the Lansing Library for 20 years. A plaque hangs at the entrance of the Lansing Historical Society in her honor.