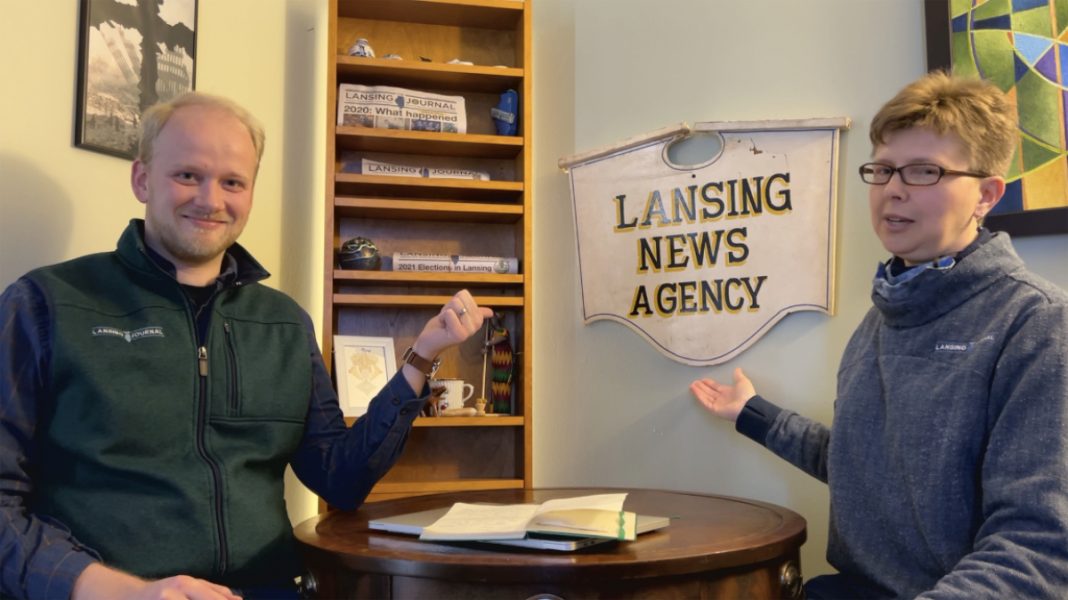 Melanie: Hello everyone, I am Melanie Jongsma of The Lansing Journal, here with Josh Bootsma, our Managing Editor.

Josh: Hello everyone. We come to you at a new time in a new space today. We are filming this at night, and we are in a new space. Totally different. Melanie, you did a great job making this look very Lansing Journal-like. It looks great!

Melanie: It’s a work in progress. Ya know, things started last week when we had input from one of our readers and supporters, Mark Krygsheld of Stony Tire. So it was fun to have Stony Tire sponsor last week’s video, and we had made some changes to the setting—for Mark. This week we got some more input, this time from Robert DeVries. And Robert was kind enough to let me know about this amazing sign. Robert says that this sign actually used to hang on the outside wall of the original Lansing Journal building. There’s a building on Lake and William Street in Lansing that is where the original Lansing Journal used to be. It was an actual newsroom with telephones and presses…. It was an actual building with actual people reporting the news. And this sign used to hang on that building!

Josh: That is so cool.

Melanie: We are happy to give it a new home. It fits well here. I am proud and humbled to have it hanging on this wall.

Josh: Absolutely. Yeah. It is very cool, and it points back to lots of Lansing history.

Josh: Now Melanie, that story, the way you just put that, reminds me of a 60 Minutes segment that aired recently. [“Headlines. Deadlines. Bottom Lines.” aired February 27, 2022.] In that segment, 60 Minutes dives into kind of the death of local news in some areas of the country. Something that I learned from that segment is that there are large corporations and financially wealthy people who are buying up small newspapers and kind of cleaning house! And it’s really unfortunate. And this segment kind of focused in on a few particular examples of the effect that has on a community.

Melanie: Yeah, I’m thinking about the guy at the Mercury newspaper in Pennsylvania. This guy used to work for an established news organization in Pennsylvania. He was part of a staff — there were multiple people; there were departments; it was a big news organization! And now he’s the only guy left. He is reporting on his town — a town similar in size to Lansing, about 26,000 people I think he said — and he’s trying to do it all himself. And that kind of frightens me. I think, “If a well established organization like that, like the Mercury, can just crumble away, what chance does The Lansing Journal have?” It’s frightening.

Josh: It is frightening. When you look at The Lansing Journal — it’s going to celebrate its fifth anniversary this year — how is it that we’ve been able to grow when we haven’t had the foundation the Mercury had? And I think it is in large part due to the support of our readers. Our supporters have recognized the service that we provide to our community. [To viewers] So we thank you for keeping The Lansing Journal afloat, that we don’t have a Mercury story to tell at this point!

Josh: Right. And that also reminds me of the 60 Minutes segment because in that segment you saw people actively protesting the corporate takeover of local news, and you saw the effect that the vacuum of local news has had on a community. They provided statistics of corruption that occurs in communities that don’t have people to keep the powerful accountable. Maybe some of those people wouldn’t have been on the street proclaiming how much they love their local newspaper, but when it’s gone…. Sometimes you don’t know what you have until it’s gone. And we’re not saying that we’re on the verge of being gone. That’s not what we’re saying today.

Melanie: No, but we want to prevent that!

Josh: Right, and it was a stark image for me to see that.

Melanie: I feel like we need to ask people for help. I feel like NPR or WTTW when I say that, but it’s true. We are grateful for the support that we’ve had. We’ve had some good months; we’ve had good response to our requests for help. But we still live very much month to month. I don’t want this community to be without a newspaper. I think it’s important to our community.

Josh: And you and I have continued to bolster our service and improve in new areas. We meet often about specific ways that we can grow — adding a Lansing History category, and making sure that we’re covering the right sports, and having people at Village Board meetings. We’re taking steps actively all the time to grow our paper because it’s kind of a grow-or-die industry that we’re in. And so that is our status quo. Our status quo has to be growth. It just has to be.

Melanie: I want to ask our readers if they will also take a step and grow with us.

Josh: Let’s start at the most uninvolved level of involvement: you see a Lansing Journal article occasionally on facebook. Maybe you read it; maybe you just look at the headline. How does that person take the next step?

Melanie: If all you are doing is clicking on things on Facebook, thank you for that. That’s a small help. Your next step might be actually subscribing. That means you’ll get The Lansing Journal in your email inbox every morning — and that helps us. It helps us to have more subscribers. That’s a statistic that people look at, and your subscription is a help to us. So take that next step and become a subscriber.

Josh: So if I am a subscriber, and I enjoy getting the email, and I click on a couple of the headlines every day — what’s my next step at that point?

NEXT STEP: Support us occasionally

Melanie: If you are already a subscriber, I think your next step could be becoming an occasional supporter. Maybe respond to one of our appeals every now and then — send us a check in the mail, use one of our fancy-schmancy giving forms online to make a one-time donation. That would be a help.

Josh: Okay. And if I make a one-time donation, and I really enjoy The Lansing Journal, what’s my step after that?

NEXT STEP: Become a monthly supporter

Josh: So if I’m committed financially to The Lansing Journal already, let’s go to that last step. What’s another step for that person?

NEXT STEP: Become an advocate

Melanie: If you are already a monthly supporter — and we’re grateful for you —

Melanie: — maybe you could become an advocate for us. Maybe you could reach out to your friends, your network, and encourage them to subscribe or support occasionally or become a monthly supporter. We have reached out to everyone that we know! Now we need you to reach out to people you know. We need to keep expanding this network — for the life of The Lansing Journal.

What you get when you give

Melanie: Now, unlike NPR and WTTW, we do not have a coffee mug to give you, or a tote bag.

Josh: There’s nothing down here for me to pull up and show you.

Melanie: Your only reward is getting the Daily News every morning, staying informed and connected. Josh, just this week you wrote about Dutchess King, a TF South senior who went downstate for wrestling. She’s one of the first women wrestlers to achieve that level of success.

Melanie: So you wrote a story about her. You know, it’s nice for Dutchess to have her name in the newspaper, that’s one thing. But what’s really important is that now there is a record of her accomplishment, there’s a record that this happened to a Lansing student, to a Lansing resident. And that will last — you know, it’s online, it’s out there. People can always find that.

Josh: Right. And the same thing can be said about your coverage of the Thornton Township deliberations that have been going on. They’re marked by confusion! But you were there until late; you endured multiple closed sessions. And you wrote a story that same night! You stayed up late to do that because it’s important that our community knows what’s happening even at the higher levels of government, like the township.

Josh: We absolutely need you if we want to be around as long as this sign has been around! We need your help. So thank you for your support, and we ask that as we go into this next week that you consider taking the NEXT STEP with us.

Community support is what keeps this local newspaper strong

Will you take your Next Step today?

Video: A quick update on the summer print issue

Progress on the summer print issue