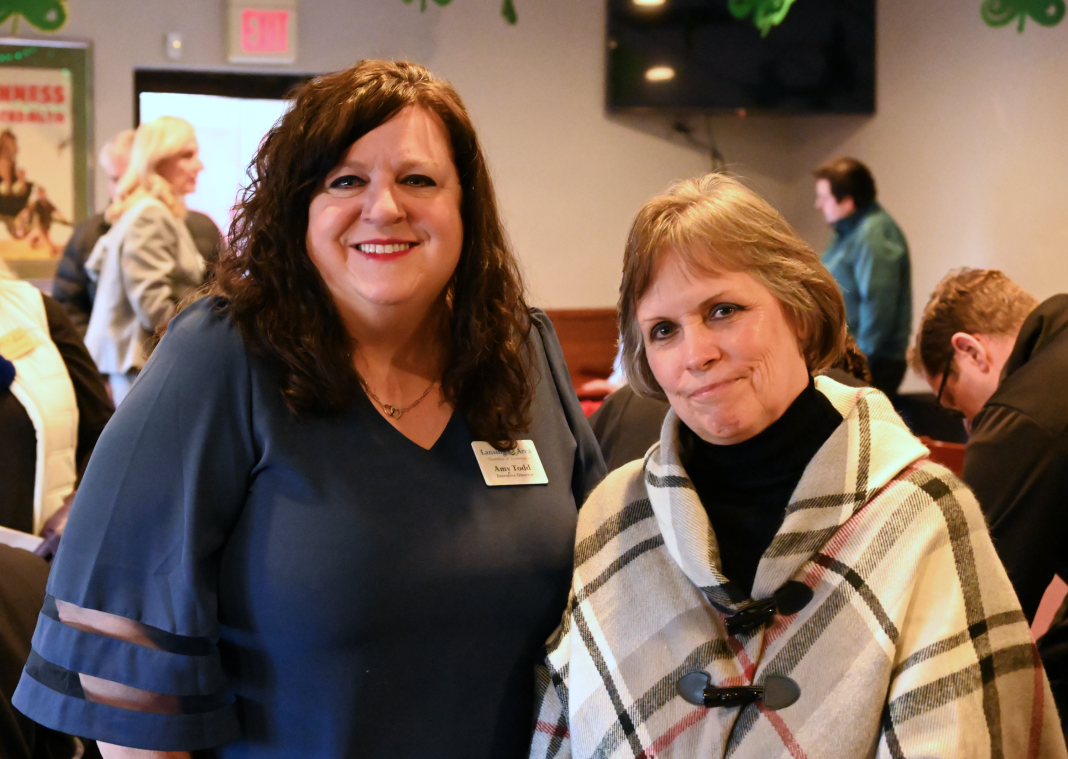 LANSING, Ill. (March 9, 2022) – In a room full of Lansing-Area Chamber of Commerce members on Wednesday, Chamber director Amy Todd announced that she would be stepping down from her position to focus on her own business. Sue Seymour, long time assistant to multiple Chamber Directors, is also leaving her post and stepping into retirement.

Todd, who is the owner of Lansing wine bar Pour on Roy, has been the director of the Lansing-Area Chamber for six-and-a-half years. Todd succeeded Mike Hollinger, who was director for only a handful of months in 2015. Todd took on the position as a stopgap measure before being formally asked to step into the role.

Seymour has been in her role for roughly 18 years.

The announcement came at J.J. Kelley’s, a Lansing restaurant where the Chamber was holding its regular Chamber Luncheon for its members — a tradition Todd resurrected during her tenure as director.

“It’s time for me to focus on Pour on Roy. And that’s where I’m going to be putting my time,” said Todd.

Pour on Roy is a wine bar that also offers beer and small bites, located at 18155 Roy Street in Lansing.

The Lansing-Area Chamber of Commerce currently has about 200 members, a number that has increased during Todd’s time as director, and includes businesses and organizations not only from Lansing but from other Chicagoland cities and towns.

Changing and improving the Lansing-Area Chamber

During her six-and-a-half years, Todd has spearheaded some new events, as well as changed some traditions.

“We didn’t have Business After Hours events for years here. We brought that back in and that was an important thing, I think, to do,” Todd said.

Currently, the Chamber holds an event every month, alternating between a Business After Hours event, and a chamber luncheon. These events are hosted by member businesses and give chamber members the opportunity to see the insides of businesses and organizations throughout town, as well as make connections with other business owners.

Todd, aided by Seymour, has also overseen the Good Neighbor Day Parade during her tenure, establishing a new route for the parade that avoided Torrence Avenue. She also helped start a tradition of wine walks, inviting local residents to sign up to visit different Lansing businesses and sample wine. The LOOP bike ride, which brings participants throughout Lansing and is highlighted by a trip down a runway at the Lansing Municipal Airport, was altered by Todd to no longer be an overnight ride.

In addition to events, Todd and Seymour have also worked with local businesses to help with marketing their business on Facebook, in directories, through direct mailers, and other avenues, work that the pair has often done beyond their paid hours.

“Sue has been through many directors. She can run the [Good Neighbor Day Parade] blindfolded. She’s definitely been a valuable — more than that — part of this organization,” Todd said of Seymour.

“I’ve learned how much our business community really rallies around each other and helps each other out,” Todd said. “Especially through the pandemic, you just saw how much people came together.”

Todd characterized the business scene in Lansing as less of a competition and more of a camaraderie.

“If I need something from another business, even if it’s another restaurant for my own business, they’re going to do what they can to help me. And it would be the same for me,” Todd said. “We all just have the same common goal to make Lansing a better place.”

Steering a Chamber of Commerce through a pandemic that has slowed commerce across the country has been a challenge. The Lansing-Area Chamber is not part of the Village of Lansing and is entirely funded by its own membership, events, and sponsorships.

“The challenge really is staying relevant, and making what we do important for our membership to want to continue to stay members,” Todd said, who also acknowledges some challenges that have arisen due to local tax bills.

“People are just looking for any ways to bring their taxes down. Most people are fighting their assessments,” Todd said. “[But] we have new businesses coming in here all the time. I don’t think it’s going to be [as bad as] people are saying.”

A new chapter for the Chamber

Chamber Board member Carolyn Scofield described Todd and Seymour’s departure as a “big loss,” adding that Todd has been excellent as the face of the Chamber and Seymour knows “so much” about how the Chamber operates.

For the time being, the Chamber will move forward with its spring events, and focus on hiring a new director at some point farther down the road, Scofield said.

The following events are on the Chamber’s calendar in the coming months:

The Lansing-Area Chamber of Commerce is located at 18155 Roy Street, Suite 3, in Lansing.

Chamber’s Wine Walk returns to downtown Lansing on May 14