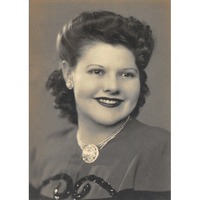 Jeanette Van Der Veen was born April 25, 1921, in Randolph, Wisconsin to Sip and Nellie Van Der Veen and moved to Dolton, Illinois when she was six months old. Jeanette lived her entire 100 years in Dolton. She passed away Sunday, January 30, 2022. She had three sisters Clara, Cora, and Frances, and brothers Frink, and Frank John. They were close throughout life. She attended grade school at Calvin Christian School in South Holland. She quit school at age 15 when her father died and hired on as domestic labor to help support her family. World War II started and she went to work at International Harvester. At first, they were making war supplies and later farm machinery. In the latter years, she was a line inspector. She worked at International Harvester until she retired in 1983. She never married but met Johnny Alfano at work and dated him for over 20 years.

She has six living nieces and nephews: Casey, Jimmy, Sid, Lynell, Janet, and Frank. Nell and Jeannie preceded her in death. She lived with her mother Nellie and cared for her until her death in 1983. She was a lifetime member of the First Reformed Church of South Holland. She kept her Bible close and read it often. She owned land near Winter, Wisconsin, and a house on Lake Thunderbird in Hardy, Arkansas, with her brother Frank, and enjoyed traveling to these locations to visit with family. She spent a lot of time with her nephews and nieces when they were growing up and gave us many good memories. We want to thank Patrick Carr for the help he gave her in her later years.

A graveside service will be held on Sunday, February 6, 2022, at 1 p.m. at the Friesland Cemetery in Friesland, Wisconsin. In memory of Jeanette, memorial contributions may be given to South Holland First Reformed Church or Calvin Christian School.