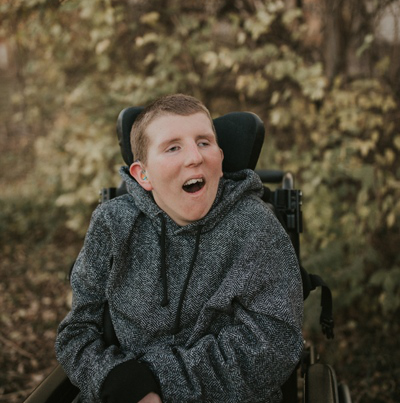 Nolan, the firstborn son of Greg and Liz, was born on February 11, 2005. In God’s wisdom, Nolan was born with a condition called Xeroderma Pigmentosum, with profound physical and mental disabilities. Throughout his years, these disabilities eventually affected every aspect of his life. He was a baptized member and attended Peace PRC, where he was shown abounding love and support and accompanied with many prayers. He enjoyed worshipping God with singing. Nolan attended the Achieve program in Protestant Reformed Christian grade school and Heritage Christian High School. He was included in his class and shown much love and friendship from the students, teachers, and support staff. On the morning of January 24, Nolan died peacefully in his home. This was the Father’s answer to Jesus’ prayer that Nolan be with Christ where He is, to behold the Savior’s glory forever.