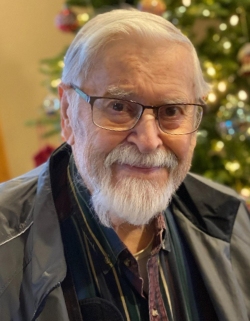 Frederick A. Stephanek, age 91, passed away on Wednesday, January 19, 2022, at The Oaks at Bartlett in Bartlett, Illinois.

Fred was born on November 8, 1930, in Philips, WI, to John and Frances (Foytik) Stephanek. Fred’s parents wanted him to stay on the family farm, but Fred had other plans. He followed his heart’s yearning for education, completed high school, and went on to earn degrees in science and music from the University of Wisconsin – Stevens Point. Graduating from college was a significant accomplishment for a Czech-speaking farm boy who started his elementary education without knowing any English.

Fred taught himself how to play the organ and became an accomplished organist. To support his way through college, he performed at supper clubs in Stevens Point. He had fond memories of performing in 1959 with the Tommy Bartlett Water Ski Show where he got to play organ for Queen Elizabeth when she visited Navy Pier in Chicago.

Subsequent to graduation from college, Fred became an educator, teaching science, while also earning a Master of Music. From 1960–1992 he taught music and served as band, choir, and musical director at Heritage Middle School in Lansing, IL. With a bit of humor and his sincere dedication, his students — who referred to Fred as Sir — found a world of music opened to them. Under Fred’s direction, students were able to bring Broadway Musicals, three nights each, to sell-out audiences that included the wider community.

Upon retiring, Fred began serving as a church organist at St. Isadore the Farmer Parish in Blue Island, IL. He also joined an organ company that repaired and tuned organs. When a church was in need of space, a pipe organ would be replaced with an electric organ, and pipes would go into storage. Due to a surplus of parts, Fred was able to acquire enough extra chests and 770 pipes to create a “hybrid” organ in the second story of his Lansing house. He would invite friends to his home for concerts, followed by food and drinks. Sometimes concerts were for members of a pipe organ lovers club to which he belonged.

In December of 2017, Fred moved to Liberty Village in Tomah, WI, and he lived there until September of 2021. Despite his declining health, Fred continued to share his presence and music with staff and residents there. Even at age 91, living at the Oaks at Bartlett, he continued playing and teaching others.

Fred was passionate about music, cooking, painting, and keenly observing the natural world. He lovingly created space for others to join him in his interests, thus inspiring them to find and follow their own interests, passions, and dreams. Fred gifted the world with his compassion and talents. His love and zest for life lives on in the lives of all those fortunate enough to have known him.

A Mass of Christian Burial will be celebrated on Friday, January 28, 2022, at Queen of the Apostles Parish in Tomah, WI, at 11:00 a.m. with the Reverend James Leary O.F.M.Cap. officiating. Family and friends are invited for visitation starting at 10:00 a.m. with a Rosary beginning at 10:30 a.m. Burial will be held at St. Patrick’s Cemetery in Phillips, WI, at 1:00 p.m. on Saturday, January 29, 2022. In lieu of flowers, donations may be given to the Queen of the Apostles Choir fund.

The Torkelson Funeral Home in Tomah is assisting the family with arrangements. Online condolences are available at www.torkelsonfuneralhome.com.