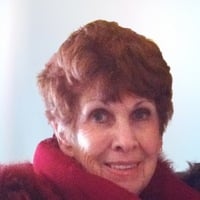 Patricia Frances Lynn passed away peacefully in her home of nearly 60 years on Friday, January 7, 2022, family members by her side. The oldest of six children, Pat was born in West Virginia to Mary and Marvin Thornton on Valentine’s Day, 1933. She always had fun with her holiday birthday and collected a variety of heart-themed objects throughout her life, from jewelry to coffee cups. Pat is survived by her children, Steve (Gail) Lynn and Liz (Bill) Malatestinic; grandchildren Christopher Lynn, Catherine Lynn (Andrew Gibson), Nicholas (Lauren) Malatestinic, and Anna (Ryan) Hunt; and great-grandson, Cole Malatestinic. She is also survived by her sisters Marilyn Ohmann and Shirley Dammarell, brother Mike (Joyce) Thornton, sister-in-law Shirley Lynn, and many nieces and nephews. She was preceded in death by her husband and parents as well as sister Nancy and brother Bill.

While she loved visiting the mountains of West Virginia, Pat lived in Northwest Indiana from a very young age. She attended Hobart High School where she was a proud Brickie cheerleader. After high school she married (Phillip) Bruce Lynn and together they raised two children, Stephen and Elizabeth, during their 39 years of marriage. Pat and Bruce enjoyed driving trips to historical sites, fishing trips to Canada and beach vacations to Florida. Their favorite and most frequent destination was to Bruce’s family’s farm in Kentucky where many happy family memories were created.

Pat’s love for travel led her to create a career for herself after Bruce’s passing in 1989. Always a hard worker, she took a class at Purdue Calumet to learn about the travel industry and then worked several years for travel agencies before branching out on her own. Settling on the business name “Travels with Lynn” she led trips throughout North America and Europe. After she tired of airports and flying, she led popular bus trips to destinations across the United States and Canada. Gregarious and energetic, she made countless friends on these trips, many of whom became repeat customers. She continued leading trips into her eighties. Always independent, Pat set an example for those around her with her integrity and work ethic. She saw the silver lining in every situation and considered herself fortunate, even when dealing with serious health issues. Her generosity to others was well known to her family and friends and she will be remembered with great fondness by all who knew her.

Funeral services will be private. A celebration of her life will be planned at a later date.