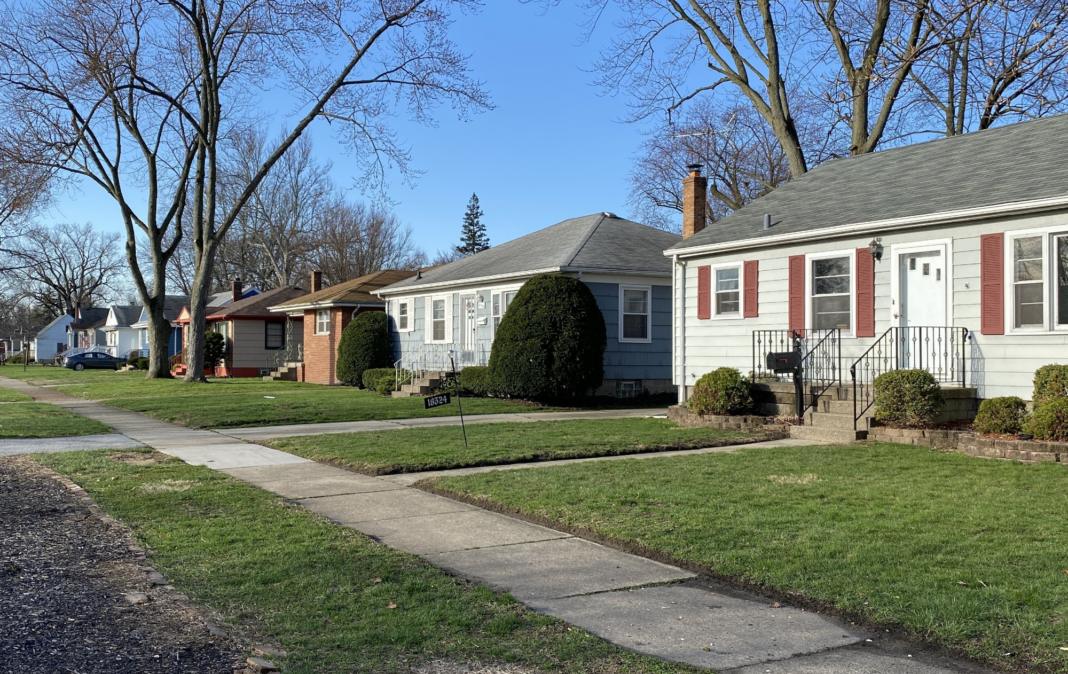 LANSING, Ill. (December 17, 2021) – As realtor Caleb Lyzenga drove with his client past a home for sale in nearby Lynwood, he saw a trail of dozens of people leading to the front entrance, all waiting to tour the home and possibly make an offer. Lyzenga looked at his client. “This is crazy,” he said.

Such sentiments have become the norm in the last year, as Lansing, the surrounding area, and much of the country have seen a white-hot real estate market develop during a pandemic where staying at home has become commonplace.

Lyzenga is a realtor with the Rossi & Taylor Realty Group, and is one of Lansing’s leading agents. He also started full time in real estate in early 2020.

“Two months. I started right before COVID, it was crazy,” Lyzenga said.

Lyzenga had been involved in real estate for years before, helping his dad flip houses and put them on the market, but he started getting fully involved only right before things started to shut down — and as the housing market started to heat up.

Heat in the housing market

The housing market momentum is likely a product of the newfound importance of staying home, Lyzenga thinks, especially as it relates to going to work.

“People are working from home, they need more space, more office space, and they’re outgrowing their houses. There’s no need to live downtown anymore for a lot of people, and Lansing is a great suburb,” Lyzenga said.

Realtor Cathy Hallow of Hallow Homes is another prominent Lansing agent and has been in the business for 30 years. She thinks the pandemic has served as a catalyst for change in people’s lives.

“It seemed like there was always an even amount of buyers and sellers … [but] during the pandemic, it’s like everyone reevaluated their life. I’ve had multiple people in Lansing who decided to sell their big house and said, ‘Hey, I’m going to live in an RV.'”

Hallow said the notion that people are moving from Lansing to go to Indiana isn’t as true as some people might think. In her experience, some older residents are moving to places like Las Vegas, Florida, and other distant destinations.

Hallow also said she thinks the market started to slowly accelerate at the end of 2019, but overall, she’s not sure what the widespread cause is for the rapid market acceleration.

“I don’t really know. None of us have any idea. All I know is my clients, and why they sold. … I know some of my clients, they just thought it was a good time to get out. Being shut in, they thought they’d go see their kids because their kids couldn’t go to them. Every client has a different reason.”

As demand increased and supply couldn’t keep up, houses spent less and less time on the market, on average.

According to Lyzenga, in 2019 a house for sale in Lansing was active on the market for an average of 29 days. In 2020, that average was cut to 19 days. In 2021, the average is nine days. Lyzenga said he had one house that he put on the market only to have it sell the next day.

Hallow has had a similar experience. She said, “There are houses I’d put up for sale that I’m thinking in a normal market would be sitting for a little while because it’s too unique, and it sells for over list price. And you’re like ‘What?'”

She said although things have slowed slightly in the last month or so, during the summer, most of her properties would be active on the market for three to seven days. During those days, the front doors become revolving doors as potential buyers walk through in tightly-scheduled time slots from morning until evening, sometimes leaving the buyers scrambling to catch up with all the offers.

“A lot of times we’d stop the showings so that the seller can go through all the contracts,” Hallow said.

“I was to the point where I would list a house on a Thursday, I’d tell my [sellers] to go out of town — just go somewhere — and then they’d come back on Monday and we would do the contract. And it never failed,” she said.

The hot market has proven a simple economic tenet true: as demand increases, so will prices. Sellers have had the privilege of asking for more money for their home, some buyers have been willing to offer well above asking price to outbid others, and other buyers on a budget have been struggling to purchase a home that meets their needs.

“There’s one buyer I’ve been working with for quite a while. It’s just hard because $150,000 doesn’t buy you what it did two years ago. It’s completely different,” Lyzenga said.

Hallow has experienced the unprecedented financial side of the market personally as she and her husband sold their Lansing house to “downsize” into a condo this summer.

Such high asking prices aren’t always the ones that are accepted however, as lending factors and the home’s appraised value usually come into play.

“I tell my clients, ‘My job is to get you to the closing table so the key is lending,'” Hallow said.

Another “X factor” that some buyers have tried to utilize is writing letters to sellers, a practice that Hallow has seen throughout her 30 years as a realtor, but it’s “more prominent” now, she says.

Though predicting future markets is difficult, both Hallow and Lyzenga have seen the market cool in recent months.

“It has definitely slowed down a little bit. I think it’s getting back to normal, where it should be. … Interest rates are still going to stay low, I’ve heard, into the next year, so that’s a good indication that the market will stay strong,” Lyzenga said. “It’s really a supply and demand issue, and there’s not a lot of supply out there so as long as that’s the issue, the market will stay a good, solid market.”

Hallow has seen a similar trend, with properties staying on the market for longer than they did during the summer.

Both realtors, however, understand that the housing market is unpredictable — especially during a pandemic that’s not yet over.