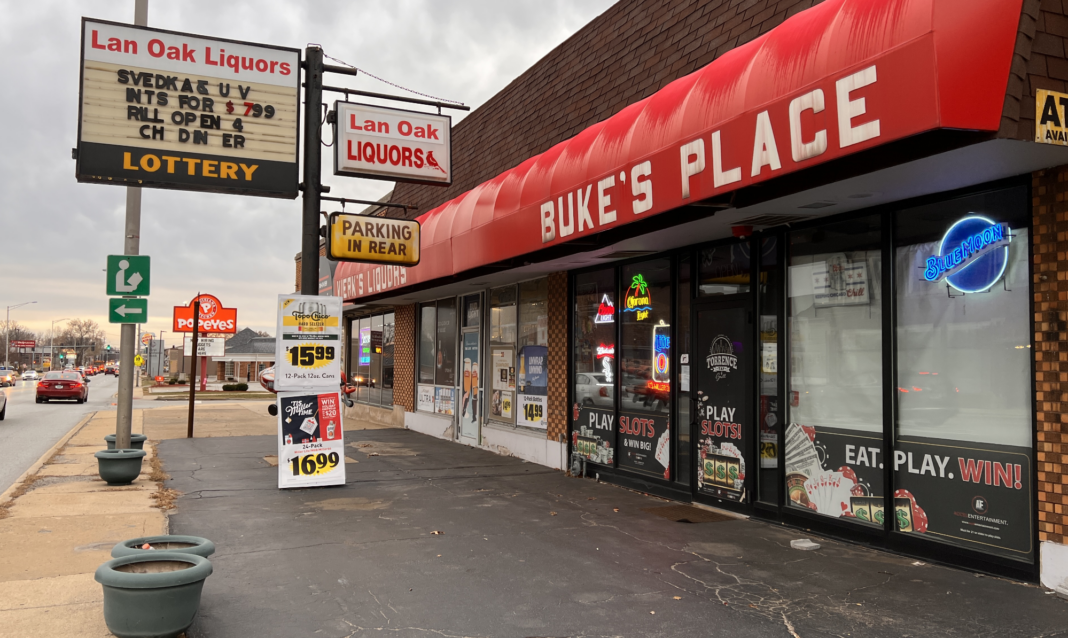 LANSING, Ill. (December 17, 2021) – Residents living near Lan-Oak Liquors — also known as Buke’s Place and Torrence Tap — are speaking out against violence that has occurred near the location and in their neighborhood in recent weeks, and are urging Lansing officials to crack down on a perceived source of disruption in the community.

At a Village Board meeting on December 7, six residents shared their stories and thoughts on the bar located at 18052 Torrence Avenue, a location from which multiple disturbances have stemmed in recent months.

Lan-Oak Liquors is a two-pronged name, referring to both the liquor store and the bar. However, the two are separate businesses that share the same owners. The Patels, who are brother and sister, also own Santori’s Liquors and Vierk’s Liquor Store in Lansing.

Concerns about violence have stemmed from the bar half of the establishment on Torrence.

“Within the past year, we have had a couple of different incidents of people with a gun,” Lansing Police Chief Al Phillips said about the bar.

Phillips said the business was connected to a shooting on October 31 when a victim was shot in the leg. However, the victim was uncooperative with Lansing Police and the cause and source of the incident was difficult to determine.

A couple weeks later, on November 13, Lan-Oak Liquor was the starting point of an altercation that eventually left three individuals shot — the intended target, who was shot in the chest, another who was shot in the arm, and a third who was grazed by a bullet. All of the victims survived the shooting.

“We have an arrest warrant out for attempted murder stemming from that incident,” Phillips said.

The Castillos live on Violet Road, immediately southeast of Lan-Oak Liquors, in the residence closest to the business.

“It happened right outside my living room window,” Natalie Castillo said of the November 13 shooting. “Four bullets went through my fence and one through my house, leaving a hole in my new siding.”

She said overall, the late-night environment near her home is unacceptable, citing bottles strewn on lawns, house-shaking music, and public urination.

“Ever since the new owners took over, there has been nothing but trouble in our neighborhood,” said Castillo. “My fear is for my safety, which is compromised, and my property value, which will certainly decline.”

“It seems like the area has turned into the red-light district,” her husband added.

The Briones family live directly across the street from the Castillos and have two young children. They brought a bullet to the meeting, which they said they found in their roof while hanging Christmas lights.

“This bullet was found in our roof, right above my kids’ room,” Elizabeth Briones told the mayor and board, holding the bullet for them to see.

Another resident of the neighborhood echoed the concern, saying the November 13 incident resulted in blood smeared across her garage and yard.

Resident Dale Meyer lives on Indiana Avenue and said, “[The business owners] need to know what they’re doing to our neighborhood. … I’ve been in town for 20-plus years, I’ve never had to hold a gun in my house until the last week or so. So, it’s serious.”

Lansing Mayor Patty Eidam and the Village Board listened to residents on December 7, responding to some of them, pointing to some actions the Village has already taken, and promising to keep monitoring the situation.

In November, the Village of Lansing issued an agreement with the Patels, the owners of Lan-Oak Liquors, outlining a curfew on open hours as a sort of probation.

“Once [the November 13 shooting happened], the mayor immediately asked for an inclusive report on all calls that had been made overall the last several months. She was provided that information by LPD,” said Village Communication Director Ken Reynolds. “The rationale was that the overabundance of calls and disruptive behavior calls from that address required action that needed to be taken. To make residents in that area feel better, but also to make sure the business understood they needed to make some changes.”

The agreement was signed by the owner on November 28 and by Mayor Eidam on the 29th in her role as Lansing’s Liquor Commissioner.

“This was a cooperative effort on their part,” Reynolds said of the Patels. “They have multiple licenses in town, and we deal with them on renewals and so forth. … They came in willingly, they were presented with the information, and they agreed to a reduction in their hours to try and get this thing back under normal circumstances and under control.”

As a result of the December 7 meeting, Chief Phillips and Lansing Village Trustee Jerry Zeldenrust visited the neighborhood and spoke with residents about what the Village is doing to address the issue.

The agreement signed between the business owners and the Village of Lansing does not specify how long the 11 p.m. closing time will be in effect, but it is the intention of the Village to closely monitor activities at the location.

“The residents that were at the meeting the other night, their voices were heard. They spoke respectfully and passionately about their neighborhood. And their concerns definitely deserve to be addressed,” Reynolds said, pointing to the ways the Village has already addressed the issue and will continue to watchfully do so. “Any violation of the agreement itself, the next steps up after that can include the suspension of, or even a revoking of their liquor license. And those are decisions that fall exclusively on the mayor as the liquor commissioner. … It’s important to note that [the business owners] understand that there’s a problem that needs to be addressed.”

Chief Phillips said, “They clearly have our attention. So we’re doing what we can to make sure we’re keeping an eye on it. Our citizens spoke, we heard them, and we’re going to keep up the extra patrols there and focus our efforts on making it a safer, more quiet community.”

The Village Board heard the owners’ presentation at its August 17 Committee of the Whole meeting, and trustees voted on September 7 to approve both a Class 8 Real Estate Tax Assessment Classification for Bevda’s and a Class 17 liquor license. As of this writing, the definition of a Class 17 liquor license is not listed online in the Lansing Code of Ordinances.

Before public comment at the December 7 meeting, the Village Board voted to approve a Class 16 liquor license for Torrence Liquors, the Patels’ corporation. Which business of the Patels the license was being awarded to was not specified. A Class 16 liquor license is designated for on-site beer and wine consumption in an establishment where the primary business is the sale of food and/or coffee, according to the online version of the Lansing Code of Ordinances.

A public commenter asked about the issuance of the Class 16 license to Torrence Liquors, and Mayor Eidam said, “The Class 16 liquor license was merely a housekeeping issue that we discussed at the Committee of the Whole a couple weeks ago. It’s neither here nor there as far as the current issues are.”

At the November 16 Committee of the Whole, Village Attorney Matthew Welch said there had been a discrepancy in liquor license identification numbers and said, “What we’re requesting is we go back and reorganize everything and get it correct. It’s just a clean-up of the liquor license code. No additional license are being granted, no rights are being changed.”