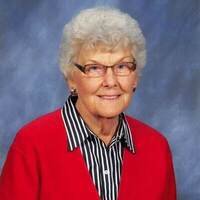 Ellen Rose Gabrielse (maiden name DeJong), age 90, of Crown Point, IN was born on March 8, 1931, and passed away on Tuesday, December 14, 2021. She was the beloved wife of the late Steve Gabrielse to whom she was married for 53 years until his death in 2004. Ellen was the loving mother of five children, Gerald (Ellen) Gabrielse, Robert (Arla) Gabrielse, RoseAnn (Lance) Engbers, Iris Huisenga, and Susan Schutten. She was a cherished grandmother of 17 grandchildren and 46 great-grandchildren. Ellen was one of 7 siblings, a dear sister of the late Harold (late Marion) DeJong, late Rich (late Ida) DeJong, late Kay (Ed) Molendyk, Wilhelmina (late Merv) Jabaay, late Pearl Wiltjer, and Jim (Shirley) DeJong. She was preceded in death by her parents, George H. DeJong and Rose DeJong.

Ellen attended Illiana Christian High School in Lansing where she designed the original emblem representing the school and was in the first graduating class. She was a lifetime member of the Oak Glen Christian Reformed Church (now Oak Glen United Reformed Church).

Ellen was a full time homemaker who was gifted in sewing (sometimes witnessed when her five children, at a young age, were often dressed alike).

In 1970, she and her husband Steve organized a nationwide effort from their basement to support the right of astronauts to read biblical passages or say prayers during their transmissions from space. By mailing petitions to churches throughout the country they gathered close to 650,000 signatures that were presented to the National Aeronautics and Space Administration, and to congressional representatives.

Later, after the kids were out of the house, Ellen learned to paint, producing more than 50 paintings that filled her walls at the several homes where she resided until her death.

The final years of Ellen’s life were spent at Bickford Senior Living where she was beautifully cared for by “additional family members” as her mind slowly drifted away. Ellen was loved by her family and those who knew her. Children were with her when Jesus helped her step through the doorway into heaven, her eternal home, where she will live forever.

Due to increasing COVID risks once again, the family decided that the traditional funeral visitation and memorial service would not be held, but that a brief outdoor graveside committal service at the cemetery will be held on Saturday, December 18, at 1 p.m. at the Oak Ridge Cemetery just west of Lansing, Illinois. Family and friends are invited to attend.

Memorials may be made to Mobility Ministries, 12352 N 550 W. Wheatfield, IN 46392. https://mobilityworldwide.org/affiliates/indiana-demotte/