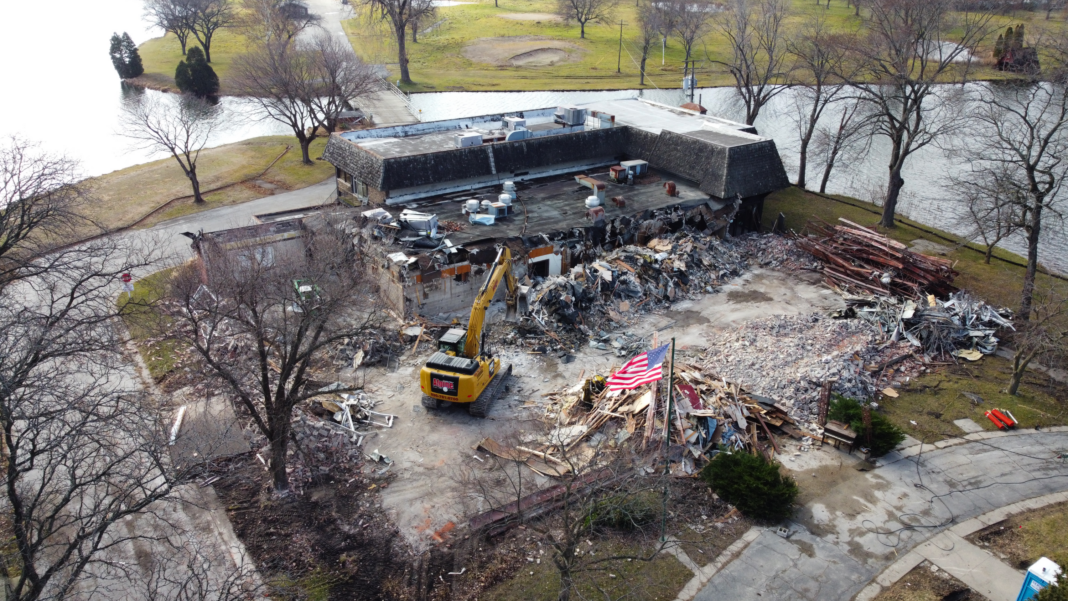 LANSING, Ill. (December 16, 2021) – Smells of dust and finality were in the air Thursday morning at the former Lansing Country Club as an excavator brought crashing to the ground a building that was once significant to many local golfers, anglers, bocce ball players, and countless others.

The demolition of the clubhouse at the former Lansing Country Club is the latest change to the property, which is now owned by the Saxon Partners. The group bought the property in in late 2020 and have already established plans to develop the Indiana portion.

The future of the Illinois portion — in which the clubhouse was located — is still uncertain, though Gary Warfel, a development director for Saxon, last week said, “While we have not made any commitments for Illinois, we are considering a potential commercial use for the Illinois side that would bring commerce and jobs. We plan on discussing new ideas with the Village of Lansing as things materialize over the next few months.”

The demolition of the clubhouse comes after the original clubhouse — which in more recent years had served as a school — was demolished last week.

Warfel said of the recent demolitions, “Those buildings were all in very rough shape and plagued by deferred maintenance … [they] were loaded with asbestos and had to be properly abated.”

As the clubhouse was being demolished, a few former club members came to take photos and collect a brick or two from the rubble.