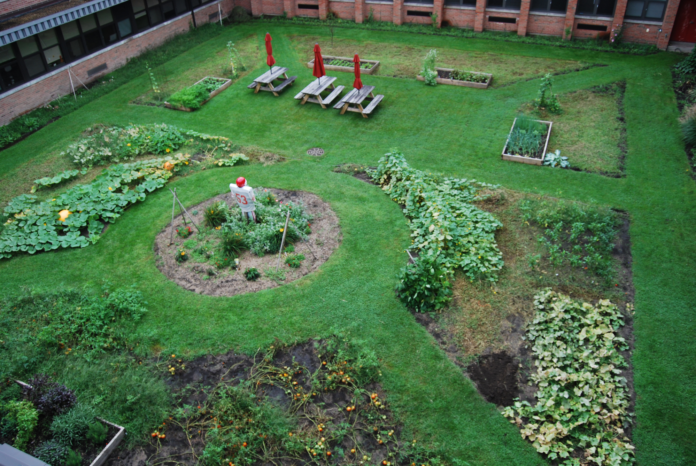 LANSING, Ill. (November 14, 2021) – Farmers across the country are winding down their seasons — picking the last of the harvest, cleaning up fields and preparing the soil for next season. Home gardeners are gathering the last of the hearty vegetables and watching their blooms brown and shrivel, ending a season of bounty as they take shelter for winter with eyes ahead to another season of renewal when spring rolls around.

At TF South High School, gardens have been part of the campus for at least a decade, providing opportunities for staff and students to be part of an ongoing project of producing crops, beautifying the campus, and creating a tranquil space between the busy hallways.

Tucked in between the hallways of TF South are a couple of courtyards that have been transformed into elaborate gardens. The creation dates back 10 years when the east courtyard garden was completed in 2011.

At the time, there had already been a flower garden installed by a couple English teachers, a fountain, and some birdhouses as well as a tree planted in memory of a staff member’s baby who died from Sudden Infant Death Syndrome.

Raised beds were being planned through a grant initiated by teacher who was retiring. The grant allowed for funds to plant raised grated beds at both the TF South and TF North campuses.

Dan Drewno, whose wife Julie works in the attendance office that faces out into the courtyard, asked to get involved as the planting was being arranged in 2011 and he still is involved with the garden today — as is his wife. At the time, Brett Bartlett was coordinating the garden along with Lelise Skpock, a horticulturist. Drewno said that they asked Bartlett if more than raised beds could be added and a plan for the whole courtyard was developed.

“The original plan called for pavers around the raised beds which was changed to a center meeting place in the courtyard with picnic tables. So some of the money that was for pavers ended up being spent on more perennials,” Drewno said. “The original garden was divided and transplanted into the new beds. The fountain was moved under the overhang along with the birdhouses. The picnic tables and raised garden beds were constructed by the building classes during the 2010-11 school year. They also made a couple compost bins.”

The east courtyard’s picnic tables with umbrellas among the gardens can be a peaceful oasis for staff at lunch time. Drewno said that the space was used during the pandemic shutdown last school year by some of the staff who were working onsite. He heard it was even utilized by a staff member for yoga.

As the east courtyard was being completed, thought went to adding more gardens in another courtyard. With the involvement of teachers who helped secure more grant funding, funds were available to pay for more garden tools, a shed, wheelbarrows, carts, and other supplies.

Like the initial courtyard, the second garden is a mix of perennials, annuals, veggies, berries, and herbs. The layout and plantings change from year to year.

Recently added was a memorial bench to honor beloved staff member Mary Henry, a longtime math teacher at the school who lost a battle to cancer at age 50 in 2018.

Drewno explained that the gardens have been the result of collaborations of many people over many years. Support from administration has been important and many staff members have lent their time and talents to improvements.

Groups of students have also helped to make the gardens what they are. Football players have laid mulch. Spanish Club and Golden Apple Recipients and other clubs have involved students. Teachers of special education, P.E., science, and other departments have been involved. Drewno’s own daughters and their friends have pitched in.

“The garden has had many helpers,” Drewno said.

“The courtyard gardens are truly a labor of love shared with our school community led by Mr. and Mrs. Drewno,” said TF South Principal Jacob Gourley. “They beautify our school grounds on the inside and provide fresh vegetables for the Lansing Food Pantry.”

Teacher and coach Bob Padjen is a leader of the school’s Wellness Committee. Members raise funds for supplies, donate vegetable flats, and host a planting day to help the Drewnos get the garden started early in the season. “Twenty teachers usually take an active role in planting the garden,” said Padjen, who leads the committee with Tim Cocco and Gina Helbling.

Since school wasn’t in session during planting season and it was uncertain what the next school year would look like, planting was lighter than usual, but there were some herbs, tomatoes and pepper plants put in.

“Dan and I planted most one afternoon so the community garden would continue,” Padjen said. “Dan has been an amazing person and 100% of the garden’s success goes to Julie and Dan Drewno. Our committee is just a helping hand for our school and community.”

This year the smaller-than-usual harvest was utilized by staff, but in the past there has been an abundance of veggies and herbs and there was more than enough to go around. Some of the harvest each year goes to staff members at the school, but the school’s culinary classes have also utilized some of the fresh herbs and vegetables for recipes made in class. The culinary arts classroom overlooks one of the gardens. The bounty has also been distributed to people in need in the community via the Lansing Food Pantry.

With the help of TF South librarian Gail Meyer, a Facebook page was established to document the progress of the gardens and share what’s going on there. Below is a video of a mother duck and her ducklings being escorted out of the gardens through the school: