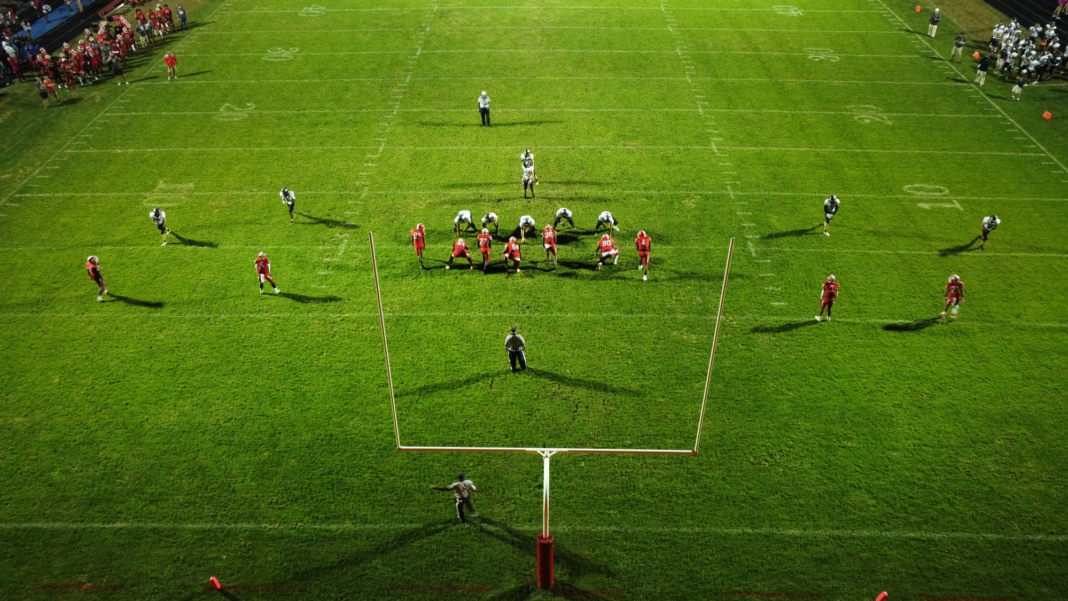 LANSING, Ill. (October 1, 2021) – The weather and the numbers on the scoreboard cooperated for an ideal homecoming game at TFS on Friday night, as hundreds of students — past and present — gathered to support their school.

Following Wednesday’s homecoming celebration on Padjen Field, when the homecoming king and queen were announced, Friday’s festivities started at 4 p.m. with the annual tailgate. The JV football game started at 4:30, and as the sky started to darken, many began to gather inside Padjen Field to secure their seats for the varsity showdown against Oak Forest High School.

The first score of the game ignited the large crowd, as senior quarterback Jacob Urdiales threw to senior Ernest Temple for an 80-yard touchdown.

Later in the quarter, junior Jahlil Robinson recovered a fumble at Oak Forest’s two yard line, which Urdiales ran in for a touchdown on the next play, making the score 14-0 after a successful kick from senior Ivan Villalobos.

With 9:44 left in the second quarter, Urdiales again threw for a touchdown, this time targeting senior Willie Roberts, who had four completions on the night. The kick failed, resulting in a score of 20-7.

The final score of the half was a five-yard touchdown run by Temple with about 40 seconds left on the clock. The halftime score was 26-7 after a failed two-point conversion.

To start halftime, the homecoming court was announced, with a brief bio given for each student. Last introduced were king and queen Ryan Coleman and Carla Martinez.

A video of all the halftime performances is below:

After a field goal by Oak Forest, TFS struck back with an impressive touchdown pass from Urdiales to sophomore Charles Miles. A video of the catch is below, followed by the PAT by Villalobos.

Team stats and next week

Ernest Temple led the team in both rushing (144) and receiving (87) yards, and also caught an interception on the defensive side of the ball. Urdiales provided all of TFS’ passing yards, going 14/21 with one interception.

TF South faces district rival TF North next Friday, at the Meteors’ field. The game will start at 7 p.m. With a victory next week, TF South would punch their ticket to the playoffs.

“Records don’t matter. They’re 1-5 coming and we’re 5-1. It doesn’t matter what you are. Anybody can beat anybody in that type of game. It’s a rivalry game. … The kids know we’ve got to play one game at a time,” said Padjen.

Homecoming festivities continue on Saturday, October 2 with the 40th reunion of the TFS class of 1981.