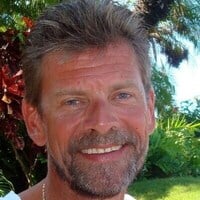 Rob (Robbie, Bob) graduated from Rich Central High School in Richton Park, Illinois and Lewis University in Romeoville, Illinois with his degree in Aviation Technology. His office was an airline hangar where he was the Director of Maintenance; his final years were spent at Global Jetcare in Brooksville, Florida. He was so passionate about his work.

Rob’s favorite days were spent at home on the weekends with his best friend who was also his wife, Penny. In the afternoon, they would float in the pool, enjoying music and a few cold beers. After being thoroughly suntanned, they would get ready — but you know Rob, he had to take his time with his outfit, hair, and (especially) his cologne. When he was ready, together they were off to enjoy a dinner out on Saturday night.

He also loved his many yearly beach vacations, hopefully which included some fishing and family. Countless hours were spent watching sci-fi movies and musicals, for which he was razzed endlessly. He always had such a soft spot for dogs, and enjoyed walking his Golden Retriever Molly on the weekends.

Rob left behind his wife Penny of 32 years, two daughters, Michelle Brezek and Stacey (Kevin) Federation. He was the cherished Papa of Caitlyn, Maddie, Jack, Nathan, and Vincent. He was a dear brother to Karen (Bill) Dodaro, Jill (Steve) Orze, Kim Wiberg, Cathy (Chris) Piazza, and many well-loved nieces and nephews. He leaves behind past and present close friends and colleagues. He was preceded in death by his loving brother, Kevin, in 2009.