LANSING, Ill. (September 27, 2021) – Sunday was a day of celebration for Bryeasha Blair and her family and friends, as they came out to celebrate the grand opening of Blair’s new business, Never Surrender Studio. The ribbon-cutting ceremony officially opened the personal training studio, which promotes healthy living and positive mindsets.

Blair, the owner of Never Surrender Studio, is not a stranger to the Lansing community as she has been a resident for the past two years.

The concept of never surrendering began for Blair back in her collegiate basketball days. In her second and third year at the University of Central Florida, she tore both her ACLs and in her fourth year, her beloved grandfather passed away. After these traumatic experiences, Blair had every reason to drop the ball and walk away from the game.

Instead, Blair pursued her dreams as a professional athlete at her second college, South Carolina State University. That same drive and determination has led Blair to follow her passion as a personal trainer and open Never Surrender Studio at 3365 Ridge Road, Suite 2 to assist others in living their best lives.

Blair says the vision of Never Surrender Studio was created by life lessons of never giving up, conquering failures, and not allowing them to end her story. She is most proud of taking past shortcomings and turning them into success stories.

“I look at failures [and] ask myself what I can learn from this to make my next endeavor even better? I played professionally for two seasons on two different teams, but even then, I knew there was a higher purpose for me,” Blair said.

Moving back, and forward

Her most significant challenge during her time as an athlete was being away from her family for twelve years. Though she was focused on her athletic goals, Blair felt she lost something greater, and missed being around her family. This weighed heavily on her and gave her the motivation to move back and reconnect with her family and friends, which ultimately led to the creation of Never Surrender Studio and apparel.

“My dad has always told me basketball is just your vehicle to get you to where you want to go. So, with that, I have never turned down any opportunity that basketball gave me, even if it wasn’t basketball-related,” said Blair, who is a coach, personal trainer, and clothes designer.

Before opening Never Surrender Studio, Blair worked as a personal trainer out of her home and at Centennial Park in Munster, Indiana. She was motivated by those she trained to open her own brick-and-mortar studio. One person in particular that inspired her was her brother, Eric Blair, Jr., when she began to see physical, mental, and work-ethic changes in him.

“My brother, whom I love dearly, gave me confirmation that I was doing something right,” said Blair. Then she knew she needed to create a place where people could come together, be transformed, and become mental champions: “To be a mental champion is redefining adversity with opportunity and positively transforming the mental mindset,” she said.

Bringing the vision to Lansing

Blair wants Lansing residents to know that Never Surrender Studio is a place of transformation, positive change, growth, and comfort. When people enter the doors, they will encounter a refreshing, supportive, and authentic environment, she says.

Never Surrender Studio is open Monday – Friday, 5:30 a.m. – 9:00 p.m. by appointment only. Some Saturday appointments may also be available by contacting the studio. The studio’s website is: www.neversurrenderstudios.com. 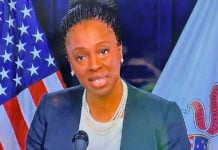