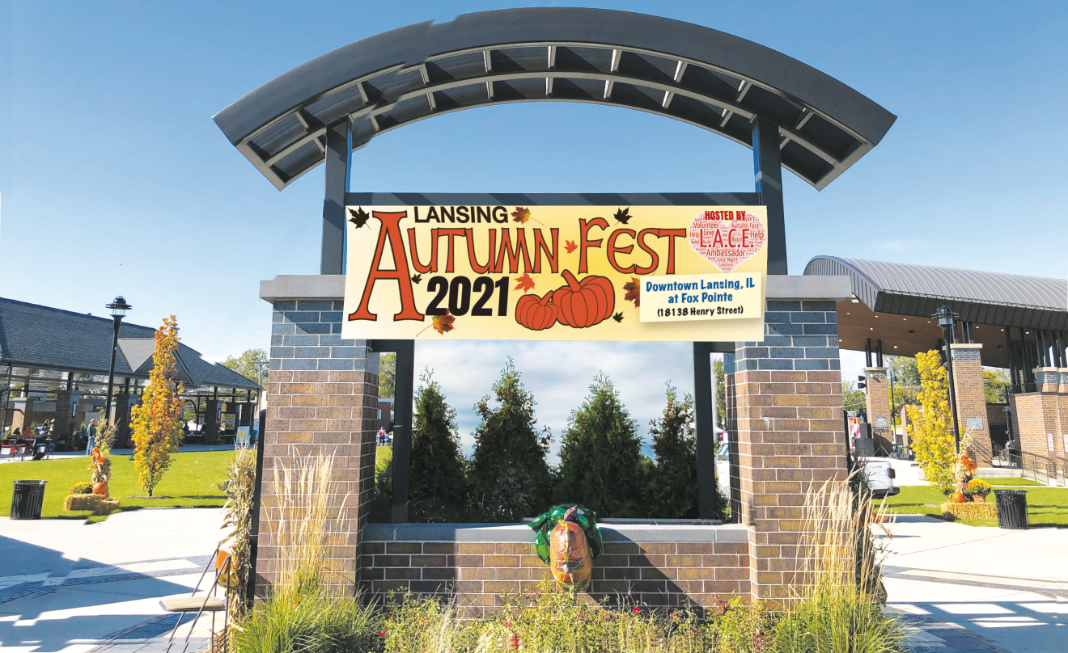 LANSING, Ill. (September 19, 2021) – The return of fall means the return of Autumn Fest in Lansing. Eager to bring the annual tradition back to life after a COVID-caused cancellation last year, LACE (Lansing Association for Community Events) has scheduled this year’s fest in September for the first time, spanning Friday, September 24, through Sunday the 26th.

“We were scheduled for September last year, which of course didn’t happen,” explained Debbie Waitekus, a LACE Director and Secretary of the Board. “We are hoping that [this year’s September event] gives us a little more Daylight Savings time, and we’re hoping for a little warmer weather. …The later we go into October with the fest, the colder it is.”

2019’s Autumn Fest suffered from both cold and rain, which affected the turnout. As of this writing, the forecast for the upcoming weekend looks promising.

Food will be available throughout the weekend from a list of vendors that includes a mix of Lansing eateries and outside guests: Ace Catering, Boz Hot Dogs, Izzy’s, I-94 Ribs & Grill, Legion Riders, Skyline Snowie, Taqueria La Soga, Von Vittles, and Withers Concessions.
A change for this year: the marketplace section of the fest is now located on Randolph Street, north of the stage, and it comprises fewer vendors.

Autumn Fest starts on Friday, September 24, at 4 p.m., with a ribbon-cutting ceremony officially welcoming the public to Fox Pointe. This marks the third year Autumn Fest has been held in the fully-realized Fox Pointe venue.

Friday’s music line-up leads with Little Giant, a pop and rock band focusing on music from the 60s and 70s. Gone 2 Paradise — a Jimmy Buffett tribute band — follows at 8 p.m. The grounds close at 10:30 p.m. on Friday.

At 11:30 a.m., the main stage at Fox Pointe will host a military tribute. Waitekus said in addition to the program, the tribute will utilize two video boards to highlight Lansing veterans and first responders. These boards will display “hometown heroes” throughout Autumn Fest.

In the pavilion at 1 p.m., Evil Knievel’s granddaughter Krysten Knievel and her band Knievel Duo will perform. At 5, Rockology Chicago will take the main stage, followed by Together Band at 8 p.m.

A popular attraction for the younger Autumn-Festers is the Kids Zone, which is open on both Saturday and Sunday from 12 – 5 p.m. Five bouncy houses are planned for both days, and a $5 wristband can be purchased for all-day access.

On Saturday at 1 p.m. in the Kids Zone, Jeff Rosinia will lead a karaoke event, and at 3 p.m., kids can enjoy a “Word of Reptiles” show. The Sunday schedule includes a magic show with Ken Mate at 1 p.m. and “interactive entertainment with Brian Wismer” at 2 p.m.

Sunday, the final day of Autumn Fest, opens at 10 a.m. The only musical performance on the main stage is by Cowboy Jukebox, a band that describes themselves as a “country rock party band.”

At 4 p.m., the Pumpkin Cash Raffle drawing takes place. Raffle tickets were sold throughout the summer by LACE Directors and local businesses, and they are available for purchase throughout Autumn Fest weekend as well. First prize is $10,000; second prize is $2,500; third prize is $1,000; fourth prize is $500; and fifth prize is $250.

Autumn Fest wraps up at 5 p.m. on Sunday.

This year’s three-day Autumn Fest is LACE’s eighth iteration of the event since its inaugural year in 2011. LACE skipped last year’s fest as well as the 2017 fest, which would have occurred while Fox Pointe was being constructed.

The original Autumn Fest led to the formation of LACE back in 2011, Waitekus said, and she feels that this year’s fest is as exciting as it has ever been.

“I think we’re actually more excited for this year than we were in 2018, which would have been the first fest at Fox Pointe,” said Waitekus. “We’re very excited because we know people just want to be together.”